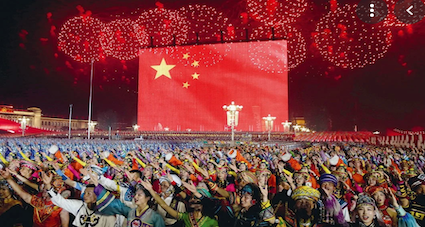 History was generally thought to be important for governance because it offered lessons, insights, and analogies that a country’s leaders could use to guide policymaking. However, history, especially manufactured historical memories (disseminated via top-down mass education and mass media), is a much more powerful tool that can be used by political elites to justify policies and decisions.

In the last decade, there are numerous examples of history being used to justify policies.

Brexit, for example, became a strong movement partly because it was built on the back of significant romanticization of the United Kingdom’s previous standing in the world. Even though this was a history detached from reality, it was a powerful galvanizing force among large swathes of the British public.

In the United States as well, Donald Trump’s efforts to “Make America Great Again” were heavily informed by romanticized historical memories and, despite a repudiation of Trump’s politics and methods, history is also front and center in much of the rhetoric of the current Biden administration.

However, unlike in the United Kingdom and the United States, where the instrumental use of history appears a more recent phenomenon, the Chinese Communist Party (CCP) has a much longer experience (starting with Mao Zedong) of using tailored historical memories to drive policymaking.

Particularly key to the CCP has been its active periodization of history – that is, its demarcation of specific periods to single them out as unique or special.

The most well-known periodization of history pushed by the CCP is arguably the “century of humiliation.” This period is roughly framed in China’s system of “patriotic education” as stemming from the encroachment of imperial powers (starting with the First Opium War in 1839) up until the establishment of the People’s Republic of China in 1949.

The end of this so-called century of humiliation is presented as an important historical watershed in China. Not only did it mark the CCP’s full ascension to power, it was also proclaimed by Mao as China finally “standing up” to imperial foreign powers.

Although the “century of humiliation” is still used in CCP-initiated communications, arguably an even more important periodization formulated by the CCP in recent years has been the use of the slogan, “China is not the country it was 100 years ago.”

This is a clear reworking of the century of humiliation trope and has been used, most notably by Foreign Minister Wang Yi, to push back on external criticism and to remind foreign audiences that China may have given in to foreign demands in the past, but that is not the case now. The evoking of the much infringed-upon pre-1949 China serves to contrast with China’s contemporary major power status to further demonstrate the crucial role of the CCP in China’s revival.

Curiously, however, since December 2020, the slogan has been altered to “China is not the China of 120 years ago.” The most notable use of this new version came the week after tense high-level diplomatic talks between the United States and China occurred in Alaska. In response to the initiation of sanctions over alleged human rights abuses in Xinjiang, Ministry of Foreign Affairs spokesperson Hua Chunying reiterated the 120 years version of the slogan in her press briefing to draw attention to Western powers repeating history to gang up on China.

As memes on Chinese social media had been quick to point out, there is an interesting comparison (and contrast) between the 2021 Anchorage talks (and subsequent fallout over Xinjiang) and the 1901 Boxer Protocol meetings from 120 years earlier, when a beleaguered Qing Dynasty was forced to sign off on huge indemnities in reparation for the Boxer uprising against the international legations.

This recasting of the political rhetoric by 20 years works to calculatedly pinpoint a time in history when China came away from an international negotiation humiliated and subjugated, which is then contrasted with its present-day power.

But this repackaging also serves another instrumental purpose. This year marks the 100th anniversary of the founding of the CCP, which is an important (but politically sensitive) event for China. The transition from 100 to 120 years avoids the simultaneous association of the 100 years of a weak and encroached-upon China with the start of the 100 years in which, as the party histories explain, the CCP has brought about the nation’s revival.

The 100th anniversary of the CCP is being used as a springboard for another point of historical periodization that will become increasingly important: the 100 years from the advent of the CCP to power in 1949. In his New Year address, Xi spoke of 2021 representing the “historic crossroad of the ‘Two Centenary Goals’” and proclaimed that a “new journey of comprehensively building a modern socialist country is about to start.” Similarly, Foreign Minister Wang described the imminent moment of the centennial as “a new historical starting point” to emphasize how China plans to bolster future international cooperation through its flagship international infrastructure project, the Belt and Road Initiative.

History does not remain static for the CCP. It is something that is consistently getting remolded and shifts according to contemporary politics. And as time goes on, history has become not only important to international affairs but also serves as an essential galvanizing agent for the CCP domestically, particularly as other forms of legitimacy, such as economic performance and ideological conviction, have waned.

To this end, Xi has been a great proponent of the importance of history, especially CCP history, and he has been actively revisiting key historical moments to help bolster not only his legitimacy but also his vision for China. For instance, in his report at the 19th CCP National Congress in 2017, he pledged to “remain true to our original aspiration” (biewang chuxin) – a reminder of the centrality of socialism, and more specifically the party, to the achievement of China’s ambitions.

Since then, the use of history by the CCP has been greatly expanded, especially in 2021. Recently, government buildings have hung up slogans on studying history, a follow on from a February speech Xi made on CCP history. Then in June 2021, Xi published his thoughts on history in the CCP flagship magazine, the Qiushi Journal. Xi’s recent historical focus has been called the “largest mass-education drive since Mao era.”  Even two stations on the Shanghai Metro have received historically inspired new names, with “Site of the First CCP National Congress” affixed to the names of the Huangpi Rd. South and Xintiandi stations in the proximity of the former schoolhouse where the founding figures of the CCP gathered to establish the party.

The key message of this conscious tailoring of history by the CCP, as Xinhua put it, is that “Through the learning of history, it is not difficult to find that without the leadership of the CCP, the country and the Chinese nation could not have made today’s achievements and could not have obtained today’s international status.”

It is undeniable that the instrumental use of history often gives political elites significant power and, because of this, it is being increasingly used across the globe. But history is also a potential trap, as invoking the past in this way can imprison policymakers into path dependencies that are irrational or counterproductive: see Brexit and, to a lesser extent, the Trump years.

Ultimately, China’s increased use of history under Xi Jinping may give the CCP more power and legitimacy in the short term (at a time when it is sorely needed), but it also creates important parameters from which domestic and foreign policies will be created. The legacies of the century of humiliation and the communist revolution, among other historical symbols, will live on in China and constrain its efforts to make the most of its “new historical starting point.”

(This is take from The Diplomat with gratitude).