35 years ago, ‘Mandir Wahin Banayenge’ on a wall, that got me started 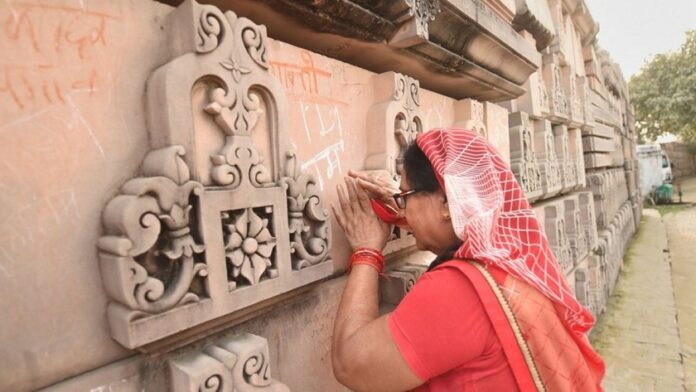 About 35 years ago, I was asked to visit Lucknow on some work pertaining to inland cargo movements for imports and exports, and landed up there to meet up with an ex-Armed Forces person who was running a mid-sized factory, manufacturing some interesting chemicals and acids which were also important from the strategic point of view of India as a strong nation. Morning flight to Lucknow, overnight train back, and a full day to wander around a city I had not been to for years after what would have been an hour of work.

As things turned out, I spent the whole day and evening with my host, and one reason was I wanted to understand better what “Mandir Wahin Banayenge” painted in big white letters on the side of the walls of his factory meant. It helped that he was from the same Regiment that my cousins had joined, that my father was from the Indian Army, and that I had recently stopped wearing a uniform myself.

In brief, when he explained that this was about much more than a court case that had been underway for 100 years, I was very interested. Thanks to a then seven-year-old landlord-tenant case where I was helping my father recover the only home he had, I had started to understand the Indian legal system, but 100 years was amazing even to my sense of what fairplay and justice meant in India.

And so, instead of roaming around Lucknow looking at old stones and bones of random debauched Mughal-type rulers and their harems, I found myself headed for Ayodhya with my well-informed elderly father figure guide who chose to self-drive and kept up a running commentary on the history of the route we were on as well as the case from even before Babar’s time.

To my Anglicised education, and then below 30-year-old world view as a seafarer, this was totally new. For example, I did not know that the wealth of Avadh/Oudh alone was more than that of the three Presidencies of Bombay, Madras and Calcutta put together, and that the East India Company men were not here just to trade and conquer, or plant indigo, but were also here to build the opium trade to enslave China and then build a competing slave trade from the Indian Ocean to match what was happening in the Atlantic Ocean. That day, I learnt a lot more than just the 100-year-old history of the Ram Janmabhoomi Court Case, and I also saw how my new Guru was very well known and respected in Ayodhya.

Many people who saw him would do a Sashtang Pranaam there and then, his vivid saffron turban could be seen from a distance, and he had the personality which decades in the Army brings.

On the way back I started asking questions. Why is fighting for the Ram Janmabhoomi Temple so important, I asked him, and he said – because despite 1947, we are still some distance from losing fear or becoming truly independent. We are still slaves. And that has to change.

My father appeared to agree with what I had learnt when I told him on my return to Delhi, but he also said, look, politics is not for us as yet, build your strengths, and then venture into it if you must.

I then started reading up about the connection between religion, and politics, and economic strength. This was probably the most important turning point in my life, because till then, I had been surrounded by aspirational uniforms of all sorts.

Time moved on. Politics, of which I knew even lesser, engulfed India variously, my economic strengths stabilised, and I learnt a bit about religions too. About my Lucknow guide and friend – something happened, and his factory was shut down. Last heard of, he had moved to his Regimental Centre in another State, and was staying below the radar to stay out of trouble. Life is like that.

Like many others, I kept in touch with what was going on in Ayodhya, but never really got involved.

And then I got involved. More about that some other day.

For many years now, especially in summers, I have been presenting working people I see on the road with high-visibility orange gamchaas. Also called “saffron”, this is the colour for safety at sea and on land, because it has the best visibility. Think of cyclists, rickshaw pullers, pedestrians, delivery persons, street cleaners. It is also a multi-use garment, and in these days of the Pandemic, doubles up as a head-cover and as a multi-layer mask too. About 1.6 metres long and about 0.75 metres wide, made out of a traditional Indian cotton fabric, it is also a towel.

Just by the way, the gamchaa I buy from a regular source, is saffron in colour with a green border on all four sides. We are, at the end of the day, part of a mosaic. But we need to co-exist.

Along with a bar of laundry detergent soap, the cost to me is about 45/- rupees, and I find this much better than tipping money or sweets, and seldom has it not been accepted with gratitude. This is my form of not just random charity, but my way of telling people who many of us think are invisible, that hey, I see you, I respect you, I care for your safety, and others should see you and care for your safety too. An orange gamchaa can be seen from a long distance.

Nothing stands out more than a high-visibility orange head-cover or turban or mask. Nothing matters more to a man on the street than getting respect.

It so happened that we got a home delivery of groceries yesterday. The rider was a young man, “D”, from Bihar, and I asked him if I could present him with a saffron gamchaa and a bar of laundry soap? The young man looked at me intensely, accepted the gamchaa and soap, placed it on the seat of his battery three-wheeler, and then returned. He then did a full on Sashtang Namaskar to me there and then on the road itself.

When he got up he had tears in his eyes, and said, Sir, after 100s of years, it is symbols like this and it is events like 5th of August 2020, that convince us that we are on the way to getting freed from fear and slavery.

I think very soon I am going to drive to Ayodhya.