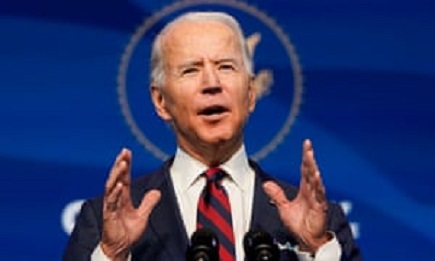 The United States President-elect Joe Biden on Sunday, in a statement, mentioned that the US is witnessing “four historic crises at once”.

He took to his official Twitter account and wrote “From Covid-19 and the economy to climate change and racial justice — our nation is facing four historic crises at once. And come January, there will be no time to waste. That’s why my team and I are hard at work preparing to take action on day one.”

Earlier also, Biden blamed Donald Trump for “abdicating responsibility” and urged Trump to sign the covid-19 relief bill. In his statement, he remarked, “It is the day after Christmas, and millions of families don’t know if they’ll be able to make ends meet because of President Donald Trump’s refusal to sign an economic relief Bill approved by Congress with an overwhelming and bipartisan majority.”

Last week, Joe Biden had also said that the “darkest days” against coronavirus “are ahead of us, not behind us.”

The relief bill was passed with bipartisan support in the US Congress and both party members had pressed Donald Trump to sign the $2.3-trillion packages.