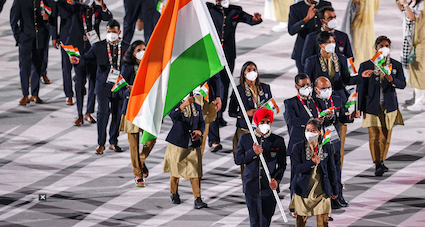 India opened and closed its participation in the Tokyo Olympics in a dramatic and classy fashion like of which country has never done before in these Quadrangular Games.

Country won a medal on the first day of the Games -a silver by Mirabhai Chanu in weightlifting, an unheard achievement till then and closed it with a first ever Olympic athletic gold convincingly won by javelin thrower Neeraj Chopra.

In between India won A silver and bronze in wrestling, a bronze each in boxing, badminton and men’s hockey—seven medals in all.

Till Neeraj won the gold, India despite having six medals in its kitty was lying at 60th place and one yellow medal propelled it into 50 club. This shows how valuable is gold medal in the Olympics.

Though Chanu gave India an unprecedented start at Tokyo, Indian campaign lost the steam the same day with high profiled shooters failing to deliver. As one shooter after another—there were 15 in total—failed to produce their much-vaunted world class form, despair was visible in the Indian camp. Archers were another disappointment,

At the end of the tenth day of the Games Indians earned their third medal, Jamaica won three medals the same day in women’s 100m. As a cynical reporter put it wryly: “What India did in ten days, Jamaicans did in ten seconds.”

Participants in10 other sports went by the script that participation in the Olympics is more important than winning. judo, gymnastic, fencing, rowing , sailing, table tennis, swimming, tennis and equestrian expectedly produced no results excepts few slightly better showings here and there.

In the super-heavyweight category, Injured boxer Satish Kumar with stitches above his eye and on his chin put up a tremendous fight against world No. 1 Bakhodir Jalolov of Uzbekistan.

In athletics, discus thrower Kanwal Preet made it to the final while 4x400m men’s relay team broke the Asian record

A look back at the performance of India in the Olympics at the start of this century shows that in 2000 at Sydney Olympics India, with one bronze medal, finished joint 71 on Medal table, moved up sixth place to be at 65th, with one Silver at 2004 Athens, climbed to 51st place at Beijing with one gold and two bronze.

At London India had the best haul of six medals (till then) (two -Silver,4- Bronze but still slipped to 57th place, In 2016 India had only two medals to show (a Silver and a bronze and hurtled down to 67 places and now at Tokyo with its best ever haul medal haul of 7 medals- one Gold, two silver and four bronze) in the Olympics- India finished 48th and moved up to top 50 club .

This time India sent its largest 228-member contingent (127 sportspersons 111 officials and support staff) to the Olympics for 18 events.

2008 Beijing Olympic was historic for India for three  reasons.  It was first time since 1928 Indian men’s hockey failed to qualify for the Games ,second  shooter Abhinav Bindra became the first sportsperson from the country to win the Olympic individual gold and also country won more than one medal in the games.

Harpal Singh Bedi is a doyen among Indian sports writers, having covered eight Olympics. He was the sports editor of United News of India (UNI) for a long time.