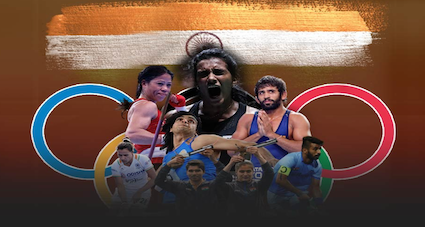 They also inform the sportspersons that whole country is behind them and praying for them and all they have to do is to have a shot at nothing less than Gold.

Now obviously these celebrities are reading the script prepared by some bright kids of a PR company. They are also raising their fists, which they assert is their victory punch, shouting Jai Hind and in the process needlessly raising the expectations of the millions of viewers.

So far so good.  However, the problem arises that out of 18- disciplines India is participating, it has virtually no chance in 10 of them and in two others it just has outside chances.

Notwithstanding that these exhortations through these glamourized advertisements raise false hopes and expectations among the masses and put further pressure on the sportspersons.

Most of Indian sportspersons going to Tokyo have barely qualified, meaning they just managed to make the cut by crossing the minimum standard set by the International Olympic Committee (IOC) along with the International Sports Federation of that discipline.

In simple terms it is like securing 33 percent marks which helps a student to pass ten plus two examinations but getting a seat in the collage is almost ruled out as he is pitted against those who have 80 to 85 percent marks. Some of those 33 percent chaps do get collage admission but in pass courses and that too through different quota systems.

With each passing Olympics size of Indian contingent has grown and now at Tokyo India will be fielding its largest contingent so far.

It would have been nice if the Indian Olympic Association (IOA) and Sports Authority of India (SAI) had not raised the expectations and had educated the fans that participation does not mean that Indian sportspersons are contenders or anywhere among the first eight in most of the disciplines.

Many a sports experts had egg on their faces with their so called authentic and authoritative predictions going haywire. Sports is full of glorious uncertainty. But to expect debutant fencer Bhavani Devi to be part of the glorious uncertainty folklore is making mockery of this cliché.

Bhavani, whose mother Ramani Sudharararaman will accompany her as a manager along with a coach and Psychologist, is still in a daze after being told that she made it to the Olympics and the Nation has been told to pray for her success.

As it is not enough Indians are also supposed to keep praying from 23rd July to 8th August for two rowers, 4 sailors, three swimmers and three golfers .and three tennis players.

Two golfers Anirban Lahiri and Udayan Mane got the tickets for Tokyo after two golfers dropped out. Three swimmers for the first time qualified after clocking the qualifying time in an international competition. We were immediately informed by the Swimming Federation of India (SFI) that it was a historic achievement. But SFI did not tell us the difference between the qualifying time and what has been the minimum time of making it to the semi- finals in the Olympics.

India’s best showing in the Olympics has been in 2012 at London where the country won six medals-Two silver and four- bronze.  The Rio Olympics was a big letdown as country just managed two medals at the last stages of the games. One bronze by wrestler Sakshi Malik and a Silver by shuttler PV Sindhu.

India’s realistic chances of medal are in Shooting (15) , Wrestling,(7) Boxing (9) and Men’s hockey.

In hockey (men) It will depend where team finishes in the pool. India’s making to the quarter finals is considered “certainty”. They are in pool along with New Zealand, Australia Spain Argentina and Japan. First four teams make it to the knock out stage from this pool. It will be real a big upset if the eight -time winners fail to make it.

Other Group is very tough as it includes World champion Belgium, Holland, Germany, Great Britain Canada and South Africa.  The group placing is going to be very crucial as it will decide whom India will clash in the knock stage.

India’s best chance of medals are on the first day with shooters Manu Bhaker and Saurabh Chaudhary and weightlifter Mira Chanu in action.

Twenty – five athletes will be representing the country in the track and field events and here again Indian public will be asked to pray for their success.

Having said that there was no need for building such hype.  As it is said let the sportspersons perform speaks.

So let us pray for their success.

Harpal Singh Bedi is a doyen among Indian sports writers, having covered eight Olympics. He was the sports editor of United News of India (UNI).