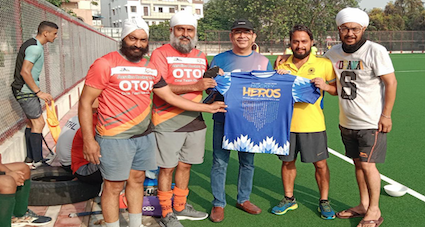 Indian hockey is riding on a euphoria The National team has won an Olympic medal, a bronze after 41 years and for some old timers it was a “dream come true”

But before the Manpreet Singh-led team broke the four the four-decade old Olympics jinx, the Indian Hockey went through very tough and turbulent phases and most of the fans lost hope of this sport’s revival in the country. The game’s popularity took a massive dip.

Most of the former Olympians and International stars were quoted as saying that their children are not interested in this sport anymore but amidst this gloom and doom, there was a group of people who kept their unflinching faith in Indian hockey.

According to Raja Namdhari, a young businessman from West Delhi, who is one prominent member of that group “We always had faith in Indian hockey. We not only supported it but also prayed for its success. We felt bad when team lost and were overjoyed when team tasted rare success

Raja became a hockey fan after watching Namdhari XI play in the domestic tournaments. The Namdhari team was a force to reckon with in the then flourishing hockey circuit in 80s and 90s.

“I loved the game and soon started interacting with others who had passion for the Indian hockey. “He said. adding “All of us supported our national team without any condition. We stood by the team in its worst period and now rejoice in its success’

“I was fascinated by the commitment of these fans who came all the way from England, New Zealand, Canada, Finland, Luxembourg and few other European countries and the USA just to support the Indian hockey”

“Even before I became part of this group, it used to follow the Indian Hockey team around the world and was conspicuous of its presence in the stadium because most of the members wore white turbans.

“They never asked for any financial help from anybody, they spent our own money and resources while traveling across the World.  They had only one motto, “Support Indian hockey, Support Indian team, Without any condition or qualification”

It was only in 2010 during the New Delhi World Cup and Commonwealth Games  that this group of passionate ‘Hockey Lovers’ officially gave themselves a name- One Team, One dream (OTOD)

Since than the group has grown in leaps and bounds having a core group of about 50 members and over 10,000 followers on social media.

OTOD gives its unflinching support to the Indian hockey team and want to see the team succeed at every event, with the ultimate goal of seeing India winning at the Olympics and World cup again.

The membership of the group is unique, the membership is a true representation of different cultures and faiths, which friendships have developed and grown through hockey,  bringing people together from around the world in support of Indian hockey.

The group had made all plans to be at the Tokyo Olympics “We had out tickets booked, rebooked, accommodation and match tickets ready but we’re greatly disappointed due to the restrictions and ban due to the pandemic. For many members it would have been their first Olympicsm, said Raja

Not to be deterred, 15 members of the OTOD met at Bangalore and stayed at the KSHA club watched the matches and cheered the team on the big screen. The joy of the group was to be seen as both men and women’s teams reached the semi-finals and the Men went on to win the Bronze.

To celebrate the team brought out two t-shirts to commemorate this great victory and members were seen at Delhi and Bhubaneswar at the celebrations.

The OTOD has developed a great camaraderie with the press & electronic media and are thankful for all the encouragement and reports.

The OTOD group has made some plans to promote the game and will unveil them in late October or early November this year.

(Harpal Singh Bedi is a doyen among Indian sports writers, having covered eight Olympics. He was the sports editor of United News of India (UNI) for a long time.)