A history as it was: Unlike the coloured ones of Marxists 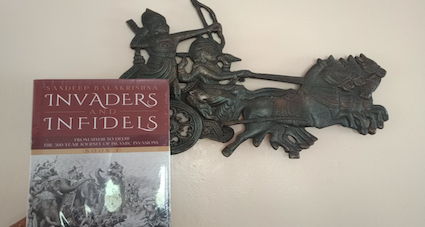 If little knowledge is dangerous, too much knowledge is fatal. We Indians are often blamed that we do not care about our rich history, however one might feel odd as the accusations are being levied on one of the oldest civilizations, where even everyday conversation is peppered with talks of history. If anything, we Indians are obsessed with history. Perhaps what we do not really care about is how it is presented to us – majorly in the distorted form and majorly by the self-proclaimed historians with a Marxist mindset.

The latter one needs more attention!

It is now a fact that the writings by Marxist historians of India distorted Indian history like no other.

It is only on these bases that a history book or article passes the test of merit and its value is accordingly determined. Now with such criteria in mind, one can notice that the writing of Marxists has always been seriously colored by contemporary political worries. They were always concerned more about the political effect on readers than anything else. They didn’t let any other historian take up a notable place not because there was any deficiency in the books written by them but because they can become a hindrance in their way of presenting ‘politically charged history’.

Too many brilliant historians, authors, and independent thinkers like Arun Shourie, Sita Ram Goel, Harsh Narain, Koenraad Elst, Meenakshi Jain, Arnold Toynbee, Jadunath Sarkar, or Ramesh Chandra Majumdar have written with an abundance of verifiable facts and logistics but were suppressed primarily because the Marxist historians wanted to conceal and whitewash all those dark facts of Islamic history to manufacture a ‘secular’ and progressive image of India. No brownie points to guess why these thinkers hardly left a mark on the intellectual scene of our country!

One such Hindu scholar was Sita Ram Goel who didn’t find enough mention in intellectual debates and was often dismissed as being “communal, unwanted, and irrelevant”. But The harder you press a spring the faster it will bounce back. Similarly, the suppressed work finds its way and reaches an audience that can look beyond any ideological or political prism.

One of his representatives Sandeep Balakrishna is now leading the coming of age generation of historians, who writes the history of India as it is, from the front.

Sandeep Balakrishna in his first part of the book discussed the history of Islamic invasions in India and their impact on Hindu society: Invaders and Infidels: From Sindh to Delhi – The 500 Year Journey of Islamic Invasions. It is a work of gripping history, which tells the story of the origins and trajectory of Islamic invasions into India, spanning the period of the Delhi Sultanate which was in power for almost 320 years. Not only does he brilliantly put forward what happened during the Delhi Sultanate, but also tells us why it happened. He tells us what inspired these Islamic invaders. He tells us how the Quran and the Hadis justify the destruction of Hindu temples and the conquest and total annihilation of a pagan dharmic society like Bharatvarsha.

He, unlike the Marxist historians who tried to put a band-aid on gaping seeping wounds and hoping they will not go septic but get healed, went on to perform an entire intellectual surgery that does not glorify the Islamic invaders rathers tells us about the glowing tributes of a brave fightback by Hindus during those centuries that never gave invaders any solace. In his book, he tells us how Islamic invaders destroyed the entire civilizations with their marauding armies but Bharat was never an easy option for them and it took almost 500 years for them to establish an Islamic empire in India. Even invasions weren’t made possible before 300 years of their attempts.

In his opening chapters, Sandeep highlights how dynasties after dynasties suffered the tyrants of Islamic invaders. Through his book, he presents how it was and has been a battle between two civilizations. one that followed the ethical way of life or Dharma even in war, who did not attack innocent citizens in defeat or victory and fought the battle only on battlegrounds, not in people’s homes and places of worship; and the other that had no qualms, no scruples, no rules, who had no mercy for non-combatants.

The Islamic invaders did not have any moral or ethical code and on the other hand, the Hindu kings like Prithviraj Chouhan foolishly abided by ethical code against an enemy who took advantage of it.

The book not only accounts for the Islamic invasions through cultural sense but also presents the economic benefit behind that. How rich could the smallest kingdom be that despite repeated plunder they rose again more prosperous than they were earlier?

It presented the history as it is- without any biases. The way it should be presented.