Aadhaar Act: SC may have to take another call 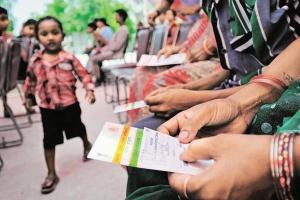 The Aadhaar issue is far from settled despite Supreme Court ruling on its validity and necessity under the Constitutional norms on Wednesday.

The ruling Modi government would go at breakneck speed in firewalling the data protection so it could approach Supreme Court again on removing the ban on private companies from accessing the users’ data. The opposition Congress, through its protagonist P. Chidambaram, in all probability would challenge the Aadhaar Bill being introduced in SC as a Money Bill in order to bypass the Rajya Sabha.

On Wednesday, Supreme Court has cleared the Aadhaar Act but barred private companies, such as banks and telecoms, from accessing the users’ data as was enabled by Section 57 of the bill. Supreme Court had also ruled that decision of (Lok Sabha) Speaker to certify Aadhaar Bill as Money Bill is open to judicial review.

Supreme Court clamping down on Section 57 wouldn’t please the ruling NDA government. The Supreme Court ought to have asked for a stronger privacy and data protection measures rather than bar private companies from mining Aadhaar. All the world’s technology giants, be it Facebook or Google, Alibaba or Tencent, have been empowered by their governments to control global businesses. India’s only chance is with Aadhaar: after all it enabled a newcomer like Reliance Jio to build a 200-million users’ base for its telecom operations. India’s UPI, RuPay and Bhim platforms are today earning world’s respect only because of users’ Aadhaar being available to them. Supreme Court ruling makes Aadhaar cost-effective but not profit-enabled.

As for the Money Bill part of the Aadhaar ruling, Congress would be encouraged by the dissenting note of Justice Y. Chandrachud who declared it a Constitutional fraud and illegality. (If one could ask, what’s so Constitutionally upright about Collegium System where judges choose judges?). Chidambaram and his ilks are unlikely to let go the opportunity of Aadhaar as Money Bill being open to “judicial review.”

Readers must also remember the dichotomy of Congress/Opposition position vis-à-vis Aadhaar. It was alright for them—and the Lutyens’ Media—to allow Right To Information (RTI) where the privacy of a petitioner is compromised. The privacy and dignity of an individual doesn’t matter to them on RTI. But they have used it as a handle to obstruct the march of Aadhaar.

And if one could ask, what about the private data of millions which UPA collected without committing themselves to Aadhaar in pre-Modi era? Wasn’t it foul, fraud and illegal given that it hadn’t obtained a judicial consent?

The fact is that because of Aadhaar, no longer the beneficiary receives only 15 paisa of the Rs 1 allocated to him. The Modi government has already saved upwards of Rs 90,000 crores from leakages and frauds in the benefit schemes. As per a World Bank report, Aadhaar could save upwards of Rs 11 billion in exchequer’s outflow of funds to the really poor—and not fill the coffers of ghost and duplicate entities. Today, the dole-outs are auditable. Fake ration cards and MGNREGS job cards are no longer working, saving the tax-payers’ hard-earned money. If Chidambaram could explain, how could benefits be paid without identifying the beneficiary?

As for Justice Y. Chandrachud’s critique, just a mere suspicion of constitutional and legal impropriety is not enough to overturn or jeopardize countless schemes and billions invested in enabling technology. If other Judges had gone along with Justice Y. Chandrachud, it would have caused chaos and havoc, not to mention billions of taxpayers’ money going down the drain. Judiciary needs to uphold laws and Constitution but not when its’ at odds with the larger interest of poor and society. Laws are for the citizens; not the other way around.