Adi Shankaracharya: The Greatest Indian Ever We Know So Little About 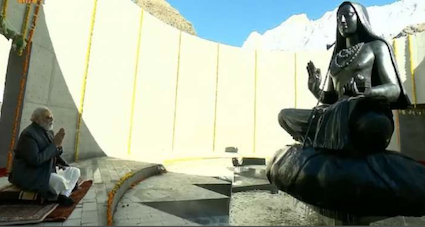 (Dr Bibek Derby, chairman of the Economic Advisory Council-PM, is a scholar like few are. Here he is in conversation with Pavan Varma, a diplomat-scholar-politician who has written a book on Adi Shankaracharya, arguably the greatest Indian to have walked this land ever. The legend is in news because the prime minister Narendra Modi unveiled his grand statue in Kedarnath, Uttarakhand on Friday. This is a condensed transcript of their conversation for the show Ithasa for Sansad TV).

Dr. Bibek Debroy: What attracted you to Adi Shankaracharya?

Pavan Verma: I think Adishankara was, as a subtitle of this book says, is Hinduism’s greatest thinker. For the sheer rigour of his intellect, for the fascinating life, his pivotal role in the evolution of Hinduism. Many of us have heard of Adi Shankaracharya but don’t know enough about his life, when he lived, where he was born, where did he take Samadhi? What were his achievements in the secular realm? What were his writings relating to philosophy and metaphysics?

So I set out on the voyage of discovery. He was born in the deep South, Kerala and he took Samadhi in Kedarnath in the 8th century, 788 to 80. At a very young age, just 32 years old, he took the samadhi. I went to his birthplace and travelled with his metaphorically, from the banks of Narmada to Omkareshwar, where he went, at the age of seven or eight, to join the hermitage of his guru. He stayed there for three years and then went to Kashi to Badrinath and Kedarnath and at just at the age of 32, he set up four matts.

Dr Bibek Debroy: We don’t know when Adishankaracharya was born and when he died.  You gave certain dates, If we ask, why did you opt for these dates?

Pavan Verma: If you go to some of the Matts in Puri or Dwarka, there is some belief that he was born in 3000 BCE and I don’t want to get on quibble on history. On the basis of several authorities, including S. Radhakrishnan and judging his commentary on some other including Buddhist scholars and what followed him subsequently in the form of Ramanujan who come along with Vishist Advait and empirical evidence on the ground such a Kalady, where his house has been preserved, I came to the conclusion that these perhaps the most likely dates but I do not say that as a fiat because I believe that some individuals of such iconic stature, there can be more than one view as to when they lived .

I went to Kashi where Adishankaracharya had some of his greatest debates because his preferred instrumentality for propounding his point of view was shastra, civilized discourse, discussion and on the banks of Ganga in Kashi where he lived, this young scholar had shastrartha with variety of scholars because, as you know, there was no one school of Hindu philosophy, so there were many opinions. He said in shastrartha there but no one can pinpoint where he lived in Kashi so that was one part of my research to try to bring together evidence. So It is my preferred choice of dates.

Dr Bibek Debroy: will you quickly tell about the anecdote connected with his possible death- the story of the crocodile and his mother.

Pavan Varma: While he was a very small child and he was keen on sanyas. Now we are talking about the only child of a widowed mother and this is Kerala in the 8th century so she was naturally extremely reluctant to let this only child of hers adopts sanyas. The Purna river flowed along Kanady and there is a crocodile ghat also there, so it is said he with his mother was swimming in the river and a crocodile caught his leg and he shouted out for help. He said to his mother that I will not come out until you agree to my request of becoming a sanyasi. And mother, in the moment of crisis, agreed to the request.

Dr Bibek Debroy: I always thought Adishankaracharya was a phenomenal teacher. Do you have a favourite stotram?

Pavan Varma:  Well, you know the stotram Nirvana Shatakam is very popular and many listen to it every day, but for me, long ago, when I heard it first time in my college time, it gives you s sense of transcendence. A sense of liberation. When he says,

Look at the sense of appropriation. shivo’ham shivo’ham, I am Shiva. In any other religion, this would be called blasphemy but Hinduism allows it.

Dr. Bibek Debroy: We have Dvaita, Advaita, and Vishishtadvaita. What is the difference between all three?

Pavan Verma: Advaita or nondualism postulated the ultimate and non-negotiable of one cosmos permeating called Brahm. Brahm is Akhand, achintiya- beyond thought. It is nirvishesh. It is supreme intelligence and all-pervasive. It is Nirguna, without attributes. Shankaracharya builds up a tremendous corpus of scholarship in proving the primacy of Brahm and everything else is a derivation.

The problem is the Brahm supremacy was never challenged but Brahm as a concept for a normal devotee was much too dry a notion to actually propel a devotee towards Bhakti and personal communion with the personal god. So what Ramanuja did- he did not question the primacy of Brahm but allowed for Ishwar which is Vishishtadvaita. Brahm is the ultimate, Ishwar is derived from Brahm and that Ishwar is accessible to the devotee. I can go to him, actually worship in form and ask occasionally something from him because he is my Ishwar.  All of these are attempts to personalize Brahm in the form of some manifestation of a personal god to a devotee because the concept of Brahm was dry much dry which although nobody ever questioned. So we finally lead from Brahm to Ramanuja, Vallabhacharya, Chaitanya to a full-blown Vaishnavism of only Bhakti to a personal god.

Dr Bibek Debroy: Tell us about his debates?

Pavan Varma: Well his greatest debate was with Mandan Mishra. Adi Shankaracharya believed in Gyan marg while Mandana Mishra belonged to Karma kand school. So they belonged to different schools of thought. Mandan Mishra believed if you perform your Karmas, in the appropriate manner, as prescribed by Vedas that is sufficient t achieve moksha. Adi Shankaracharya believed in the power of knowledge rather than merely karma. He went to Mandan Mishra to have a debate,  a shastrartha- civilized debate which is nearly extinct today—and the two sit down for a debate but then who will be the judge for the debate?

Mandan Mishra then proposed the Uma Bharti- his wife to be the judge and Adi Shankaracharya had no objection. Imagine the trust and nature of the civilised debate that one person’s wife is the judge and the other person has no problem in accepting.  So the debate continues for weeks and months and all of Hindus followed the debate by word of mouth. Shankaracharya wins the debate and the condition was whoever loses the debate will become another’s follower and join as a decipher but Uma Bharti objects.

After Mishra lost the debate, she said as his wife- his ardhangini- one half of him and therefore you have to debate with me before we finally accept the defeat. She begins to ask questions to Shankaracharya on the basis of Kama Shastra about which Shankaracharya, as a sanyasi,  has no knowledge. So Shankaracharya begs for 30 days of leave to pick up gyan about Kama Shastra. There’s a very interesting story, He then entered the dead body of king Amruk through his brahmarandhra, proceeding to the toe.  Adi Shankaracharya in the body of that king goes back to the palace and learns all about Kama Shastra. So just in time he left the body of the king behind goes back to Uma Bharti, had a debate and wins the debate.  Then she and Mandan Mishra became his disciples. This story illustrates the validity of four Purusharthas in the worldview of Hinduism: Dharma (righteousness), Artha (economic values), Kama (pleasure), and Moksha (liberation). Each has a place, not necessarily in the life of sanyasi but the idea was to broad base the appeal of Adi Shankaracharya.