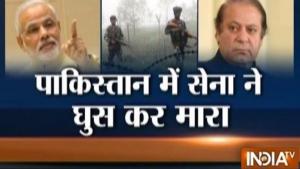 The way it works, look after yourself and your dear ones in public places over the next few days. It is unlikely Pakistan’s sleeper cells won’t be activated to cause explosions in Indian metros. Or riots are not engineered in India’s hinterland. Or attacks don’t happen in Jammu and Kashmir. Anti-national forces within the country–the known culprits of political opposition, NGOs and Lutyens Media–are unlikely to let Narendra Modi’s government raise the toast for too long.

The way it works, there can’t be headlines which show the Modi government in good light. I hope I am shown cynical by events to the contrary over the next few days. But soon enough you would find major events to take away the smiles from the faces of our jawans and common citizens. As I said, these anti-national forces are so embedded in India’s vital organs that they can’t allow it to be healthy for long.

The way it works, you wouldn’t find “investigative” reports on Indian army’s surgical strikes across the border. Like you find in our journalism of courage a series on “dalits” and “cow vigilantes.” Remember, those who are praising Indian army for their bravery today have never shed a tear when their lives are lost or cared to visit their bereaved families like they do with every “Dadri/Akhlaq” event, unfortunate and tragic as they are  (only this week all the major newspapers had an anniversary special on Akhalq killing).

The way it has worked in the last 30 years, these “peaceniks” first blow up little incidents in Jammu and Kashmir into national consciousness. And when the Central government contemplates action, they fill the newspapers with edits on why “peace” is so important in the region; why Pakistan’s nuclear arsenal could fall into “rogue” hands and why “restraint” is important for “Aman ki Aasha.”

The way it works, it emboldens Pakistan to carry out more dastardly attacks, knowing well that India is reduced into a soft state by these “cells” in Indian media. There has never been a strong measure—“a jaw for a tooth” if you may please—from the Indian Centre, not even after 26/11 happened right in the heart of India’s financial hub, Mumbai.

The way it works, these “peaceniks” withdraw into their shell when faced with a strong current of nationalistic fervour, only to return with gusto on engineered events. You should have seen the usual culprits on a few Indian television channels after surgical strikes on Thursday. The tone was quite a few notches down, unlike the shrieks which accompanied the “death of a son of a schoolmaster” in the Valley.

The way it didn’t work was when their attempt to create an “Indian Spring,” a la “Arab Spring” failed. They created JNU (Afzal Hum Sharminda Hain, Tumhare Kaatil Abhi Jinda Hain”), Jadavpur University, Hyderabad and Valley in a bid to keep the “popular uprising” narrative alive on front pages. Newspapers were filled against “sedition law” and how “freedom of speech” is being curbed by a right-wing government. How Modi government is creating a communal polarisation even after “Kairana” was shown to be true by National Human Rights Commission (NHRC); Rohith was shown not to be a “Dalit” and the Prime Minister had urged strictest action against “cow vigilantes” who take law into their hands.

The way it worked on Times Now yesterday, Arnab Goswami had a simple question for these “peaceniks”—In this moment of changed national mood, would they still say that we should look for peaceful dialogue with Pakistan? Atul Kumar Anjan of Left frothed in anger and walked off from the debate.

The way its working now is that none of the usual suspects have dared raise the bogey of peaceful measures. They know in India of last few hours, any conciliatory tone towards Pakistan would hurt them big time. So they would lie low for the time being and would return with twice the force if a riot or bomb explosion happens in next few days. It is these “peaceniks” we need to stand in guard against.

The way it didn’t work is with the tragic “suicide” of Bansals’ family. Don’t think it’s unrelated. The suspicious “suicide” note; the astonishingly stupid design to drag Amit Shah had just been set in motion by Lutyens Media before the surgical strikes beyond the LoC happened. Bansals’ won’t work now. A riot/bomb explosion could. And that’s my fear now.