Aligarh as Harigarh: Those who fume in mouth need a reality check 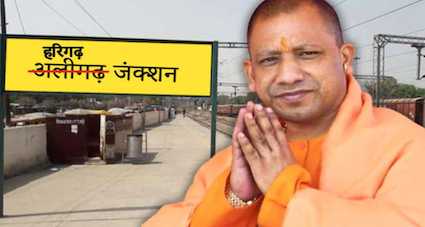 It could happen that Aligarh is renamed as Harigarh. It’s also on cards that the city’s airport would be named after BJP leader Kalyan Singh who passed away this week.

One could be sure all hell would break loose. You’d have OpEds in Indian Express, Shekhar Gupta would have his 50-word edit, TheWire, Scroll, Quint etc would work itself into a frenzy. The local plants of WaPo and NYT would fume in mouth.

Yet none of them had any issue when most of India’s national projects, institutions, fellowships and awards are named after Nehru-Gandhi clan. After all, 26 sports tournaments and 17 stadiums are named after them. In the Capital itself, the two showpiece structures are Nehru Stadium and Indira Gandhi indoor stadium.

Some 450 national schemes, buildings and fellowships bear Nehru-Gandhis names. Your airports, ports, universities and academic bodies. The tip where India ends, the Pygmalion Point was rechristened as Indira Point. Mumbai harbour is Jawahar Dweep. Why, we even have Mount Rajiv in Himalayas.

This has been a systematic attempt to marginalise those whose contribution to India’s emergence has been second to none. But they have been made to pale in presence of Nehru-Gandhis. As if they never existed. Wiped out from public memory with the connivance of Lutyens Media. As if India belonged to a dynasty and was never a constitutional Republic.

But try remembering the hell which breaks loose whenever a Faizabad, Allahabad or a railway station (Mughalsarai) is renamed. Sure, there are political connotations involved but for some it’s a corrective which is long overdue. I mean why would you have some as memory of Mughals while ignoring one (Pt Deen Dayal Upadhyaya) who is the ideologue of a national party, presently the choice of majority of Indians.

Then we have critics who also pant when the talk of renaming Ahmedabad as Karnavati is whispered. Or when prime minister Narendra Modi rechristened Kolkata Port Trust after Jan Sangh founder, Syama Prasad Mookerjee, a legend whose role in saving Bengal for Hindus was monumental.

So it’s been by naming Rajiv Gandhi Khel Ratna Award as Major Dhyan Chand award. Come to think of it, what was the prowess of Jawaharlal Nehru, Indira Gandhi or Rajiv Gandhi in any sport whatsoever? How would we recognize our Dhyan Chand, Sunny Gavaskar and Sachin Tendulkar who earned India respect across the globe?

This manufactured narrative becomes shameful if we remember that it’s not just BJP and its’ favourites who are being mainstreamed. How many know that in 2018 alone, more than two dozens towns and villages were renamed and approved by the Centre, none of which have anything to do with the BJP?

Have a look at the names changed and you would realize the present effort by the Centre is to revive the local memory of local heroes to inspire generations. To make those forgotten entities come alive to the present and future generations for their timeless effort and sacrifices. They are not BJP’s leaders or ideologues as has been the project on behalf of Nehru-Gandhis. Every region and its hero has contributed to nation building, from ancient, medieval, modern to present times. It’s only fitting that renaming evokes interest of locals, visitors or archeologists. Keeps them alive in the attics of memory of a grateful nation. And not that if everything in this country happened because of Nehru-Gandhis.