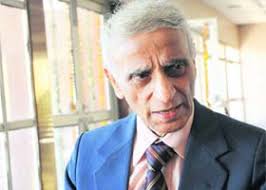 Many view India’s ballooning population, set to overtake China by the next decade, as a time-bomb ticking but a solution is now at hand which nevertheless took four long decades in coming and was hidden in plain sight.

India had only 54 millions on its population chart in 1979 when a slight professor in his 40s, Dr. Sujoy Kumar Guha, published his first scientific paper on Risug, a drug molecule he had developed as a reversible contraceptive for men. He pleaded for clinical trials. But the “Dr” in front of his name was not a medical degree; it was courtesy his PhD studies in an American university. No go, said India’s apex medical body, ICMR (Indian Council of Medical Research).

Guha chose to climb this door which was slammed shut on him by opting for his medical entrance test and becoming a qualified medical doctor. ICMR relented and the clinical trials began but more than a decade had passed and Guha was now in his 50s, an age when most men tend to get flaccid in mind.

Phase I of clinical trials progressed from rats, rabbits, monkeys to humans and were proved spectacularly successful in 1993. But then ICMR brought it to a half after someone complained that the substances of Risug are known to cause cancer. Guha argued individual substances turn harmless as compounds, just as chlorine, which could melt human flesh, becomes basic salt of everyday use when mixed with sodium. ICMR wasn’t convinced.

Dr Guha knocked the doors of Supreme Court; the Phase II was set in motion after a few years and by 2002 Dr Guha’s dreams were close to being realized before another spanner was thrown in the works. Now it was the changed international norms for clinical trials. It took Indian medical authorities another five years to put the required norms in place.

The envy which took its toll

Unsurprisingly, Guha evoked interest and envy in equal measure around the world.  The world began sniffing on his wonder drug and not always with a sense of appreciation. The National Institute of Health in the US raised questions and caused delays. Dr Guha believes to this day it was meant to promote a pill-in-the-making which, unlike his one-time injectable hormone-based drug, promised continual demand and endless profit.

Now after another dozen years, nearly 40 years all put together, Dr Guha’s dream is close to being realized. The extended tests on Risug have shown no side-effects. The Indian medical authorities are hopeful of introducing his reversible contraceptive in market in next 6-7 months.  It would be the first injectable male contraceptive in the world. Its’ competitor, the pill, is nowhere in sight.

Indian men prefer to use condoms than an invasive vasectomy surgery to sterilize their reproductive organ.  But Dr Guha’s invention is external, non-invasive and cheap and could prompt millions to opt for it, given its’ reversible with just two counter injections put in place. There is no barriers to physical intimacy like condoms.

Youth and the shackles of population

There’s a great imbalance in India’s population trajectory with southern states meeting the global trends of less than two children per household. In contrast the northern states, which contain 40 per cent of India’s population, tend to have nearly four children per household. Education, economic dependence of women, rural-urban divide all play a role in India’s population which is bursting at the seams and poses a great strain on India’s diminishing resources such as water and energy.  India has more than 600 million young people and needs 12 million jobs for them each year. Population is an issue which could no longer be put off to tomorrow.

In times gone by, around the time when Dr Guha had worked out his invention, Sanjay Gandhi, son of India’s then reigning prime minister Indira Gandhi, went for a compulsory sterilization programme to halt the population boom in 1976. Over 6 million men were sterilized in just a year. Nearly 2,000 men died because of botched operations. In the ensuing elections, India voted the Gandhis out of power. Nobody in authority has dared to do anything as dramatic as this since those dark days.

Dr Guha, nearing 80 and still sprightly, could finally give India solution to a problem which has seriously shackled the nation’s future. He wouldn’t meet the tragic fate of Dr Subhas Mukherjee who was the real architect of “test-tube baby” but lost the rights of invention to Louise Brown only because his work hadn’t appeared in any international journal. In 1981, Dr Mukherjee was found hanging in his Kolkata apartment.

(This piece is a reprint from rt.com).