An Indian rice has taken Bangladesh by storm: Even the fake one! 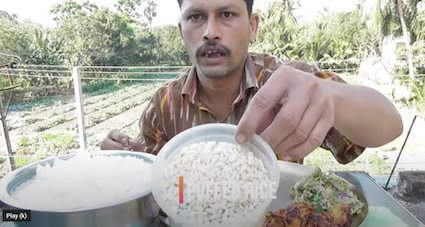 A strange Indian angle has emerged in a variety of rice sold in premium stores across Bangladesh, counted among one of the world’s top rice-producing nations.

The brand is called Minikhet. Strangely, there is no paddy by that name, and yet, everyone here pays a hefty price for it. The rice is shiny, milky white. For almost two decades, it has been one of the most popular rice varieties in Bangladesh.

But now Bangladesh, which ranks behind China and India, is worried and the government has sounded an alarm. “Mill owners are cheating people and making abnormal profits by selling this variety and we must stop this practice,” Bangladesh Food Secretary Dr Mosammat Nazmanara Khanum told this writerin Dhaka.

So what is it?

The Bangladesh rice markets have been selling Minikhet rice, and the millers have been making decent profits throughout the year. Experts say the rice is actually a very cheap variety that is polished so it can be sold at higher prices. What is worrying the Bangladesh government is that the millers are producing Minikhet rice from two of the highest-yielding paddy crops in the country.

But in reality, it is not Minikhet, it is Mini Kit, paddy seeds offered by the Indian government to farmers in north Bengal in small boxes known as Mini Kit. And then, the same is smuggled across to Bangladesh where it turned into Minikhet.

Farmers in Bangladesh realised there is high demand for Minikhet and sowed the seeds smuggled from India. It was considered an imported variety. When smuggling stopped, the farmers polished their normal variety of rice and reduced the size to call it Minikhet.

Standard rice is Taka 40 per kilo whereas Minikhet is priced at around Taka 55 to Taka 60.

The Food Planning and Monitoring Unit (FPMU) of Bangladesh has claimed rice millers were changing the size of rice, polishing it and making it shiny. As a result, there is no scope for recognising which rice is coming from which paddy. The survey also found that during the polishing and whitening, the rice lost its nutrients: protein, fat, vitamin, minerals which are found on the outer layers of the rice.

Yet, the demand for Minikhet is huge. The Bangladesh government tried hard but could not succeed in stopping this malpractice. Everyone wants Minikhet on their dining table. “Minikhet rules, and it is happening because of some Indian paddy seeds supplied to farmers living near the Bengal-Bangladesh border,” said one rice trader in Dhaka.

A recent government study found traders and millers across Bangladesh were actually capitalising on people’s preference for fine white rice, and collecting different varieties of coarse paddies or rice and polishing them before marketing them as Minikhet and Najir Shail varieties.

Political cognoscenti in Dhaka say this is not exactly a diplomatic row between the two neighbours but a bit of an embarrassment. After all, the source of the product has its roots in India.

What is further embarrassing is the fact that the Bangladesh Rice Research Institute’s (BRRI’s) research wing found that the Najir Shail variety accounted for less than one percent of the country’s overall rice output. And roughly 80 per cent of the rice sold is branded as Minikhet. The country’s safe food law prohibits mislabelling of food, and it is punishable by both a Taka 400,000 fine and two years in jail.

Food Secretary Dr Khanum said the Bangladesh government was working out a mechanism to stop the malpractice.

A FPMU study across 18 high rice-producing districts found such blatant violations of mislabelling of rice in various names. Rice millers were quoted in the study saying they milled different varieties of rice together and sold them under various names.

“Traders send sacks labelled with different rice names, while millers fill the sacks with their milled rice and send them back,” said the report.

Worse, the retailers admitted that they were unaware of the kind of rice they were selling.

BRRI officials said that the confusion emerged during the last decade because of a wrong impression that the variety of rice which is finer and whiter is better.

According to Dr Krishna Prasad Halder, director of BRRI, some farmers in Dinajpur had started cultivating the unknown Indian rice variety. From here, it slowly spread across Bangladesh. “The name caught on and the millers got hooked to pushing this variety in the market,” Dr Halder said in a brief interview. “The wrong branding of the rice is one issue, and then there is this issue of over-polishing of rice, which has serious health consequences because layers of protein, crude fibre and ash are lost in the process.”

Such milling leaves the rice with only carbohydrates, removing in the process vitamin B, thiamine, riboflavin, and niacin. It also reduces the zinc content in the rice to almost half. The reduced ash content makes the rice carbohydrates break faster. This, in turn, releases more glucose in the blood – which may lead to diseases such as diabetes in those who are pre-diabetic.

At a recent international conference in Dhaka, participants admitted that some rice varieties developed in Bangladesh and India are frequently crossing the border between the countries through informal channels.

Some Bangladeshi high-yielding varieties are being cultivated by farmers in Bihar, Jharkhand, Odisha and West Bengal. And farmers in Jessore, Dinajpur and Chapainawabganj districts in Bangladesh are also cultivating informally imported varieties. This, in turn, can have detrimental impact on food security on both sides in the longer term, said participants attending the conference titled Addressing Barriers to Rice Seeds Trade between India and Bangladesh.

The markets in Bangladesh are not aware of such a movement, and the sale of Minikhet rice continues in huge quantities across the country. Why not? Rice that glitters seems better and sells best.