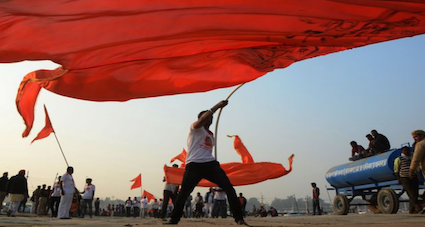 Three incidents have caught my eyes. Hindus in Surat are reciting Hanuman Chalisa on loudspeakers from temples. Residents in Gurugram, for fourth week in running, are standing up against namaaz in open places. And in wake of violence in Bangladesh, Hindus jammed the roads of Chittagong in an angry procession.

All three incidents could be seen as pushbacks by the Hindus. Supreme Court disapproves of loudspeakers and use of public places for religious purposes. Yet, namaaz in parks, railway tracks, highways etc go on unabated. What if Ramleelas choke roads, Sunderkands blare into ears in neighbourhood towns and Chanchal’s bhajans keep you awake all night? These are acts of provocation from both sides.

It won’t help that Hindus in Jammu and Kashmir and in Bangladesh are being picked out and killed. If India’s enemies want to derail this country, the surest way is for Hindus and Muslims to tear each other apart. The nation would burn; Congress being the only alternative would replace BJP in Centre; and India’s despicable media would sleep again like dogs.

From Muhammad Ali Jinnah to Syed Ahmad Khan to Iqbal, “two-nation theory” is an ever recurring theme. It didn’t end with The Partition. It’s part of religion for Muslims to seek power. If Sonia, Mamata, Akhilesh and Vijayan are conduits in the mission, they are backed. And wherever Muslims are in power, the other religions take a beating. History bears this out.

In the age of social media, Hindus are catching on the drift. They know the substantial Hindu population in Pakistan and Bangladesh (15% and 29.7%) at the time of independence has been reduced to nothing. They now regularly hear on the exodus of Kashmiri Pandits from the Valley. They bleed at the news of fellow co-religionists fleeing Mamata’s Bengal in the post-poll violence.

They are also losing hope in those who govern and adjudicate on their matters. Be it Bengal or Bangladesh, they look over their shoulders but don’t find BJP. It’s a recurring theme in public discourse that judiciary treats a Bakrid differently from an Onam. When our honourable judges treat Kumbh as super-spreader but not protesting farmers; when Deepawali is hazardous but little is done on stubble burning, the bias is too pronounced to escape notice.

Then we have the rogue Lutyens Media. When Gurugram resident stand up to namaaz in public places, Indian Express headlines: “Namaaz disrupted for third consecutive week.” How they are treating Kerala’s Covid horror compared to UP’s? An NDTV terms violent Islamists in Bangladesh as “arsonists.” The Biharis being killed in Jammu and Kashmir are “non-natives” for them even as they beat their breasts on foreign Rohingyas.

When nobody seems to stand up for you, the last option is yourself. The happenings in Surat and Gurugram could be the harbingers. I hope it’s not for who wants violence on roads, raging fire in neighbourhoods or bodies hung by poles. Besides, it would play into the hands of India-breakers. All they want is for India to burn.

The arbiters of course must step in. Our umpires, that is the government and judiciary. They are missing in action. They need to uphold the rule of the land. They shouldn’t desert the citizenry. Like the MP government didn’t when Muslim procession yesterday tried to force their way into restricted areas. Who knows if there were trouble-makes among devouts?

It’s futile to expect neutrality from the media. They would tell you that if a Babri Masjid is brought down, it’s bound to tell on Hindus in our neighbouring Islamic countries. They would justify the massacre of Hindus in Bangladesh by citing the disappearance of a hair of Prophet Muhammad in Srinagar when Hindus had nothing to do with it. They would do their best to ensure stories of periodic ethnic cleansing of Hindus from our neighbourhood don’t reach our ears and eyes.

An uprising by Hindus would be a disaster. But you can’t blame them if the game is rigged. And what use putting blame would be, anyway?