Anti-Macron protests in India could turn ugly: Indian state must be on high alert 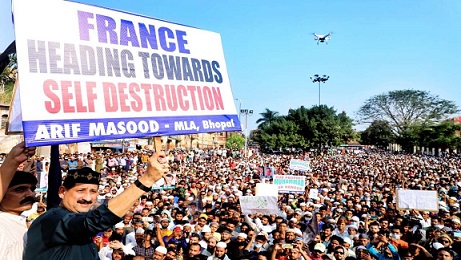 France is in turmoil after what its president Emmanuel Macron termed as “Islamist attack”. First a school teacher was beheaded for showing cartoon of Prophet Muhammad. Now on Thursday, a knife-wielding attacker killed three people, including one woman, in the French city of Nice.

The echo of France today reverberated in the form of massive demonstrations across several parts of India. A huge gathering with some Congress leaders in tow were witnessed in Iqbal Maidan of Bhopal in Madhya Pradesh.

Speaking at the demonstration, Congress MLA Arif Masood asked the Indian government to convey to its ambassador to France to register a protest against anti-Muslim stand by the country’s president.

In Aligarh, the Aligarh Muslim University students rallied against Macron by holding a protest and demanding the boycott of French products. Not one but many protest marches were held in AMU against the comments of French president.

Now has come the news that streets in south Mumbai were plastered with posters which came up overnight against Macron.

Madhya Pradesh chief minister Shivraj Singh Chouhan lost little time in reading out the riot act. He has said a case would be registered against all, including Congress leader Masood under 188 IPC (disobedience to order duly promulgated by public servant). Chouhan has said that stringent action would be taken against the culprits, irrespective of their position.

Mumbai too swung into action after BJP spokesperson Sambit Patra showed a south Mumbai road plastered with posters against Macron. The clean-up crew was deployed and the streets of South Mumbai, plastered with these posters, were subsequently removed.

Before the Nice attack, after Macron had rose up to condemn the beheading of a school teacher in Paris as an “Islamist attack”, leaders of the Muslim world, Recep Erdogan of Turkey, Imran Khan of Pakistan and Muhatir Mohamad of Malaysia had inflamed the matter with provocative words against Macron and French Republic. Muhatir had even tweeted that that Muslims had a right to kill millions of French “for the massacres of the past.”

It would be befitting if authorities are alert on how things play out in India. There is anger against killings in non-Muslim world and even Modi government has condemned the killings and supported the fight against terrorism. #StandWithFrance is trending big on twitter. The Muslim support in India for events in France could inflame matters. The French Republic has pronounced its will to fight “Islamist terror” and that should be the goal of all peaceful societies. Raking up the issue in India would be wrong and revive painful memory of Khilafat movement among others. In the 1920s, Khilafat movement in India was for restoration of Caliphate in Turkey and in its aftermath thousands of Hindus were killed and many more thousands were displaced in Malabar riots.