As Bhushan worries on sentence, Lutyens Media gets into overdrive to stop it 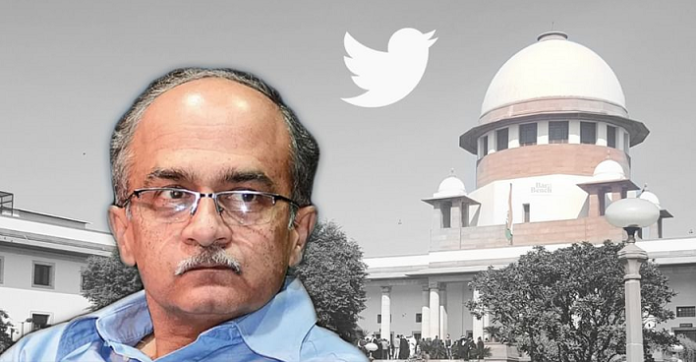 “For SC, two tweets a bid to shake key pillar of democracy”. This is the headline Indian Express has given on Supreme Court holding senior lawyer Prashant Bhushan “guilty” of contempt of court. There is little doubt many in the country would hold a similar opinion. Come on, maan, It isn’t such a big deal.

I have a feeling that many who consider the Supreme Court’s pronouncement as overbearing, if not regressive, don’t recollect the exact tweets which has messed up Prashant Bhushan today, possibly for next six months.

So, let’s get the two “offensive” tweets out of the way first.

In the first tweet, an image of Chief Justice of India, SA Bobde is posted, sitting on a motorcycle. The tweet reads:

“CJI rides a Rs 50 lakh motorcycle belonging to a BJP leader at Raj Bhavan, Nagpur, without a mask or helmet when he keeps the SC in lockdown mode denying citizens their fundamental right to access justice.”

Both these tweets were posted this year. Both have subsequently been deleted. But you can trust our good old Yogendra Yadav, a wolf in sheep’s clothing to his detractors, keeping them safe for posterity. So, here it is below.

Before we look at the two sides of the argument, let’s get the insinuation by Indian Express—“Just two tweets” out of the way.

Tweets of 280 words are actually too many to shake the pillars of society. Three words, uttered to a Muslim woman not long ago, had put millions into a hostage mode for over seven decades. Karl Marx said “Workers of the world unite” and since tens of millions have lost lives to this utopian dream. Galileo Galilei muttered Eppur si muove (Yes, it moves) under his breath when he was forced to recant his belief that it’s the earth which moves around the sun.  Yudhishtir told Guru Dronacharya during the Mahabharat that Ashwasthama is killed, but added almost silently “naro va kunjuru” (whether a man or an elephant). If you are a Hindu, you would believe “dharma” prevailed that day over “adharma”.  If Muslims were not giving a war cry of “Allahu Akbar”, the history of the mankind would’ve been different.

I have rarely seen any newspaper go to this length to report the moment. After all, Bhushan is just a lawyer, howsoever in public eye.  Beginning as lead, the story runs for nearly 1500 words. Then there is a lead editorial in disapproval over the Supreme Court’s ruling.  And, of course, there is Faizan Mustafa, “from the Indian Express panel of specialists” giving his gyaan on the matter, dominating Page 17 of the Delhi edition.

If I was an individual who was object of this derision in Bhushan’s tweets, I would find it insinuating that (a) I am shown hand in gloves with the BJP—riding a motorcycle of a BJP leader in Raj Bhavan”. Clearly two narrative are being pushed here: One, Raj Bhavan in Maharashtra is presently occupied by a BJP Governor; (2) The bike belongs to a BJP leader; and thus Bobde is comfortable enough in the environment to astride it.

The second tweet is a frontal attack. It says that in the last six years, democracy has been destroyed in India and the Supreme Court has played a key role in its destruction.

These are not just two tweets. These are two DAMNING tweets. Besides accusations, these are factually wrong too, as Supreme Court elaborated in its judgement on Thursday, in response to Bhushan’s assertion that SC in a lockdown mode was denying citizens their fundamental right to access justice.  Said SC:

“…(Bhushan) has made such a scandalous and malicious statement having himself availed the right of an access to justice during the said period, not only as a lawyer but also as a litigant.”

The thrust of Supreme Court’s view was that such wanton conduct could lower the image and credibility of judiciary in the eyes of the common man for whom Courts alone are a mechanism where he could get justice.

Over the next few days, expect the pressure on judiciary to mount on this matter. The apex court is to announce the quantum of Bhushan’s punishment on August 20.  You would see a concerted campaign to ensure that Prashant Bhushan gets off lightly for his crime. If he gets the maximum of six months of jail, it would send the chill down the spine of those who are in the business of targeting judiciary. It would thin the ranks of axe-wielders on judicial banyan tree. It would upset the entire agenda of a certain set.

We all would see whether the Supreme Court makes an example out of Prashant Bhushan or lets him go lightly, coerced by the media pressure.  Just scan your newspapers closely over the next few days. I promise you a lot of fun.