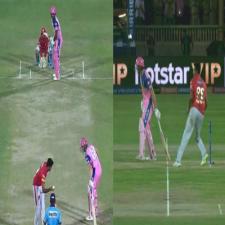 There was a time when I only wrote about cricket—no less because it kept the fire in my kitchen burning. Then I thought there were more things important for the nation and revival of its heritage than reporting matches and roaming around the world.

Until, the spirit of the man-in-front-of-laptop-in-pressbox re-emerged on Monday night. Slouching on my sofa, I saw Ravichandran Ashwin run-out non-striker Jos Butler while pretending to bowl the second last delivery of his final over in the Kings Eleven Punjab vs Rajasthan Royals match in IPL. For a few suspended seconds, I really thought Ashwin was pulling a prank. Until the odious reality dawned—Ashwin, the Kings’ Eleven Punjab captain, had done it deliberately.

See this 15-second video clip if you are a cricket fan and had missed the action on Monday night. It would show you that Ashwin in his delivery stride and cutting down his bowling action by half to flip the bails as non-striker Butler has made the motion routine with any non-striker. (The image above would be a horror to any cricket lover as Ashwin is clearly shown waiting for Butler to go out of the crease to effect his horrid plan).

This was not ugly, it was hideous. The video clip clearly shows that Ashwin had no intention of bowling the delivery. He actually waited for Butler to step out of his sanctuary. This was not a rookie bowler in his first representative match—but an off-spinner like few in the history of the game. This was a man who was prepared to sully his image from a nice one to a rogue masquerading as a cricketer. The game was on line but not lost yet for Kings’ Eleven Punjab.

This incident logically should be embedded with huge ramifications. The first controversy of IPL 2019 has come in within 72 hours of its start. Every time now Ashwin bats, cameras would pan on how often he leaves the non-striker’s crease as a bowler gets into his bowling stride. The team management of Kings’ Eleven Punjab or its owner Preity Zinta must put Ashwin on bench for at least a couple of matches unless they don’t mind being called “Ugly Punjabis” around cricket fields. Board of Control for Cricket in India (BCCI) must take time out from its internal squabbles to crack the whip unless it doesn’t mind ruffians on a cricket field and a similar roadmap for cricketers yet wet behind the ears.

His team-mates among whom is Chris Gayle, universally respected and admired and one who has made T20 synonymous with his name, should have stepped in and stopped Ashwin, if not held him by the collar (pardon me folks, can’t hold back my disappointment with Ashwin). The action of one man would now reflect badly on his team-mates including Gayle. Jokes would be spun around them, abuses hurled, puns painted on social media on this ghastly act.

Cricket commentators too have come out in very poor light after this incident. Harsha Bhogle saw it as an action within the laws of the game.  Aakash Chopra tweeted “How’s playing within the laws of the game unfair?” Former England captain Michael Vaughan put this tomfoolery in perspective when he questioned would the reaction be the same if Ashwin had run out Virat Kohli in this manner? Shane Warne wasn’t pulling his punches on Harsha Bhogle: “Please do not be bias and stick up for your own. Any player in the game that does that to anyone is an embarrassment to the game and as captain it’s even more disgraceful,” tweeted Warne, “Mr Ashwin you would be remembered for that low act.”

Ashwin is 32 years in age, a prime age for an off-spinner. Even though he is not in scheme of things of India in shorter formats of the game—both T20 and ODIs—and his Test career is in doldrums after the emergence and recent success of Kuldeep Yadav in Australia, he still is a certainty for India in five-day cricket in India. Long after his career is over, he would regret his lowly conduct in Jaipur the other night.