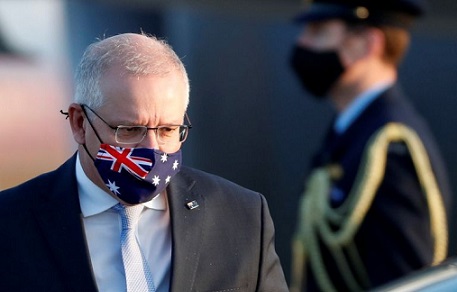 Australia’s prime minister Scott Morrison on Monday has demanded an apology from China for posting a fake picture on a government Twitter account that depicted an Australian soldier murdering an Afghan child.

Morrison said Beijing should be “utterly ashamed” for sharing the “repugnant” image.

The image with Australian and Afghan flags in the background was shared on Monday by Chinese Foreign Ministry spokesperson Zhai Lijan’s verified Twitter account with the caption: “Shocked by the murder of Afghan civilians & prisoners by Australian soldiers.”

The spat is the latest example of souring relations between the two countries, with tensions ramping up despite China being Australia’s biggest trading partner.

Morrison said Australia wanted an apology from the Chinese Ministry of Foreign Affairs and had also contacted Twitter asking the social media giant to take the post down.

“It is a false image and a terrible slur on our great defense forces and the men and women who served in that uniform for over 100 years.” Morrison went on to acknowledge that there are “undoubtedly” tensions between the two nations, but said: “This is not how you deal with it.”

However, China has rejected any calls for an apology from the Australian prime minister and said that they should be the one to say sorry for the loss of life in Afghanistan.

This is a new low in an already very tense relationship between the two key trading partners. The relations between the two countries have rapidly deteriorated this year after Australia led calls for an investigation into the origins of the coronavirus pandemic.