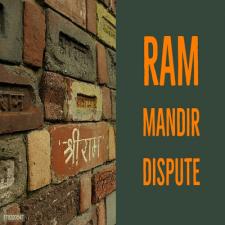 Ever so subtly, an attempt has been made today to stress that the title of the land, and not religious sentiment, should guide the hand of the mediation team and thereafter Supreme Court in the contentious Ayodhya dispute.

“The dispute over the site at Ayodhya, where a 16th century mosque stood until it was torn down by Hindutva fanatics in December 1992, has remained intractable since 1949. After the demolition of the Babri Masjid, the President referred to the Supreme Court the question whether there was a temple to Lord Ram before the mosque was built at that site. The court, in a landmark decision in 1994, declined to go into that question…it was this verdict that made possible the 2010 judgment of the Allahabad High Court, which favoured a three-way split of the site among RamLalla, the Sunni Waqf Board and the Nirmohi Akhara, which is under appeal.”

The editorial ended with a stern warning:

“No one must be left with the impression that the exercise is aimed at privileging the faith-based argument that the mosque stood at the exact spot where Lord Ram was born over the legal question on who holds the title of the land.”

Indian Express had this column by Faizan Mustafa who wrote:

“It would be more appropriate for the mediators to first acknowledge, on the basis of documentary evidence, the rightful legal owner of the site where once Babri Masjid stood and then convince this party to give up its claim.”

The two from Lutyens Media have thus stressed a common point: That Babri Masjid once stood on the contentious site is well documented and that the verdict should be based on land dispute and not on the basis of “religious sentiments” per se.

First of all, such assertion is an insult to the intelligence and knowledge of readers of these newspapers. It’s a common tactics to rely on the short memory of masses. But in case you don’t know, it’s now LEGALLY proven that Babri Masjid was built over the site of a temple. That such facts are hidden from the notice of readers by malicious and agenda-driven media is a known fact.

The ASI report (2003) said: “Excavations at the dispute site of Ram Janmabhoomi-Babri Masjid was carried out by the ASI from March 12, 2003 to August 7, 2003. Eightytwo trenches were excavated.” The ASI’s verdict was: “There are remains which are distinctive features found associated with the temples of north India.”

Thereafter the High Court bench came down heavily on the so-called academicians and historians who had filed the petition that Babri Masjid hadn’t been built over a Hindu temple.

One of the three judges, Justice Sudhir Agarwal, then breathed fire on this fake lobby masquerading as petitioners. He now put these experts under judicial scrutiny. Most of these “historians and academicians” were from JNU and were made to depose twice. These “independent” experts, historians and archaeologists had appeared on behalf of the Sunni Waqf Board. These “historians” before the ASI excavations had said there was no temple beneath the mosque.

Damningly, most of these experts were found to have connections amongst themselves. For example, one had done a PhD under the other; another had contributed an article to a book written by a witness. One Suvira Jaiswal quickly came out clean: “Whatever knowledge I gained with respect to disputed site is based on newspaper reports and what others (experts) told me!!! One Supriya Verma hadn’t even read the GPR survey report. Verma and one Jaya Menon had alleged that the pillar bases at the excavation site had been planted! Verma had done her PhD under another expert Shereen Ratnagar who had written the “introduction” to the book of another expert Professor Mandal who said he hadn’t even visited Ayodhya!. Shereen Ratnagar admitted she had no field experience.

Thus Justice Agarwal noted that opinions had been offered without proper investigation, research or study on the subject. He referred to signed statements issued by experts and noted that “instead of helping in making a cordial atmosphere, it tends to create more complications, conflict and controversy.” He said he was “startled and puzzled.”

There you go. So the next time you read in Lutyens Media about the “title dispute” and the assertion that a 16th century mosque called Babri Masjid was brought down by Hindutva fanatics, do point out to them the foundation of Babri Masjid as an evidence that long before a large Hindu temple had stood on its place and invading Mughal empire founder Babar had destroyed it and built a Babri Masjid on it.

(The related articles below could interest you:

Not Sri Sri Ravi Shankar, as per The Hindu and Indian Express. Look at the lies and bigotry.