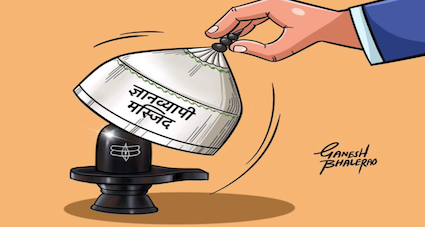 About one-third of my extended family on both sides, paternal and maternal, lost their lives in the turbulence. Since my late father was hugely responsible for saving the rest, this subject of being from different denominations was never brought up again, except at the funeral ghats as they passed on. That also, since the priests asked, and were told.

I was born in 1956, and to the best of my memory, my caste was Indian Army by birth. Around 1962, for multiple reasons involving my late father’s lateral movements in Service, I was able to add Indian Railways to my caste too. I was, therefore, back to being not just a product of two castes but now also had two castes in my repertoire.

In 1967, we moved to Delhi, and were sent to an Anglo-Indian school. Here I learnt, in more ways than one, that everybody’s caste was simply Indian. Even the foreign students in the school were Indian. We also had a good number of Indians of Chinese origin students, and it was made clear to us that they were, simply, Indians.

A huge lesson I learnt one day at this school was when the Principal explained to us that we were not North Indians or South Indians or whatever, but Indians – some of us had parents who were from different parts of a larger India but that did not make the geographical region come before the country. We could, if we wanted, be Indians from whichever part of India we were from.

In 1973 I cleared the only UPSC Exam of its time for school leavers – for the Merchant Navy. 125 of us from all over India were allotted role numbers by surname, then mixed into groups of 4 for classrooms, groups of 6 for tops (like “houses” in school), groups of 5 for dormitories and to add to the random selection – further randomly distributed by upper bunks/lower bunks. We were also kept so busy during training that all we dreamt of was sleep and food. The caste we all acquired here was the Brotherhood of Salt Water.

Then I joined real ships in 1975. Here I must add – there were broadly three castes at sea. Deck, Engine and Catering. There were some outlier castes too, like Purser, Radio and Electrical, but all ate in the same dining room. And when the storms hit our ships, as the saying went, there was no caste. Beyond 40° South or North, there was also usually no God, or there were all the Gods put together.

Anecdote – 4 of us from varying castes and religions were on a road trip in India, passing through one of the most caste influenced areas, when we stopped for a cup of tea at the home of a friend who was sailing. We noticed that three of us were served the tea in stainless steel glasses while one of us received his tea in a porcelain cup. For what it was worth, we shuffled the tea around, and left peacefully.

It was not as though we did not face caste issues – far from it. But this caste stuff was not restricted to only one religion. Or one country. So we were able to give as good as we got, when the need arose, and after that there was peace. My good friends from all over India, or global, of different religions, not one of them did not have a caste or caste-type tag as a suffix somewhere in the lineage. Often brought up if matrimonial alliances were sought. We watched as a good friend had to literally go to war with his denomination to ensure that his late mother-in-law, who was from a different denomination but same religion, and lived with them, was buried in the same graveyard as were people from his denomination.

Discussing caste with the management at a very old temple some years ago, I was told in no uncertain terms that caste or religion was no bar for entry, but that they wished they could set up a system like in another Religion, of people taking a dip in a sacred tank before entering the sanctum sanctorum.

Why wouldn’t you do that, then, I asked the Engineer in-charge – and got a wry smile in response. Would all the castes and denominations and religions take a dip together in one big water tank? We try, he added, and here I add – the man was from the Brotherhood of Salt Water, so I am very sure that he will succeed. But then, this was one of the oldest temple complexes in India, with a large number of traditions and rituals over the centuries – some good, some not so good.

With temples being returned to Indians in India, the big hope I have from this resurgence, is that the recovered temples will not have any caste discriminations because the rituals and traditions will be from New India: The New India born out of the flames of 1947 which my and many other parents believed in.

Which is why I saved this for the last – 125 juniors on the Training Ship Rajendra had to share 4 shower stalls, 4 toilets and 4 wash-basins. There was certainly no time for caste when the time allotted for these absolutions was 25 minutes – during which time we also had to polish our shoes, put on our uniforms, do whatever special duties we had to do for our seniors.

From that, somehow, we emerged better human beings.