Bail to Activists: Judiciary is in danger of losing its moral authority 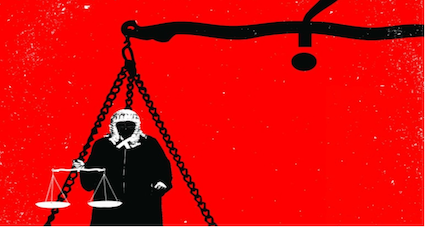 I might be jumping the gun before Supreme Court takes up Delhi Police’s appeal to deny bail to three activists (Natasha Narwal, Devangana Kalita and Asif Iqbal Tanha) on Friday but my outrage doesn’t permit me next hour.

The Delhi High Court has granted bail and stated that “dissent” is not “terrorism” and that in “their anxiety to suppress the dissent”, the Government has “blurred this line.”

It’s doubtful if any law agency has used more insulting words for judiciary than what Delhi Police did in its wake.

Delhi Police accused the Delhi High Court of “discarding the evidences which clearly made out a sinister plot of mass-scale riots being hatched by the respondent along with other co-conspirators.”

It’s one of the disasters of Western legalism, which we have adopted, where man is put at the centre of discourse. It has reached such extremes so as to make the entire society defenceless against crooked individuals. Our judiciary too, I suspect, has blurred the distinction between human rights vs human obligations. It allows guilty to go unpunished and be recipient of undeserved leniency.

Democracy, as we practice, thus becomes a showcase of fashionable opinions. If thousands are gravitating towards a trajectory, any unpopular opinion, however right, has no chance of being heard. The decision-makers, such as executive and judiciary,  tend to flow with the current and lose that moral fibre which protects a nation, its system, and its well-being.

Such is the tyranny of an individual that administrative power is easily undermined. If a government pursues against a terrorist, we are deafened by the noise on his civil rights. So mediocre and stupid we become that we see no evil inherent in human nature. Everything succumbs to fashionable opinions such as “freedom to dissent”.

The letter of law thus becomes too cold and mindless to benefit the society. In upholding the “dissent” while ignoring the cost of dozens of lives and hundreds of uprooted families in Delhi riots, it appears populism in absence of any nuanced reasons for bail.

It encourages a repeat and dilutes UAPA which, as the Delhi Police suspects, would compromise the hands of NIA in hundreds of cases.

India, even a blind could see, is battling the agenda to bring it to its knees. Every legislation which the Centre brings is being stopped on the streets: CAA, NRC, farmers’ laws etc. Judiciary is used to prevent a Central Vista. Centre is hampered in battling the pandemic. A challenge which has no precedent in living memory, an enemy which keeps changing goalposts, needs real-time response beyond  any individual. But it has become an excuse for target-practice by Opposition, judiciary and press, freeing other stakeholders from the damage they caused.

India’s judiciary is in danger of losing its moral authority. A common man already feels justice doesn’t arrive in a lifetime. In recent weeks, it has shown itself inconsistent. It has shown itself weak while dealing with individuals like Prashant Bhushan—served Rs 1 fine for contempt of court—or Rahul Gandhi and Sonia Gandhi, still out on bail after six years. There are other chief ministers who have flouted it enough for no consequences.

The words used by Delhi Police are startling, just short of defiance. It raises the spectre of non-compliance which would be disastrous for our battling nation. Our four pillars—Legislative, Executive, Judiciary and Media—are ones on which the sagacity of our Constitution depends. Presently, a few of them are succumbing to narrow interests and prejudices which would lay our country in ruins.

History tells us that a nation divided against itself can not stand. More so if its moral fibre goes missing. India needs leaders who restore such moral fibre—even if it goes against the tenets of a “fashionable” democracy. Aping this Western mode has no sync with our cultural ethos where “dharma” takes a priority over an individual.