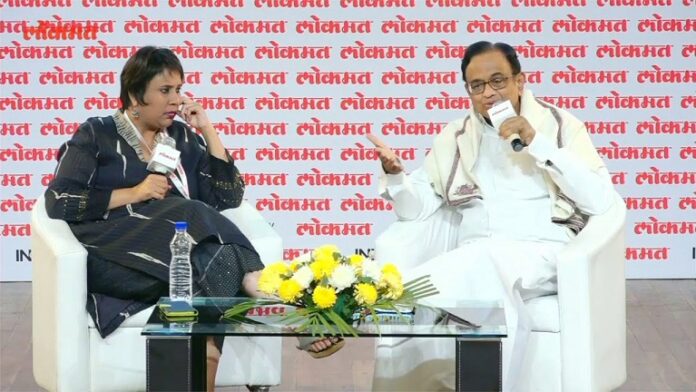 On the two sides of political divide, India’s Right and Left-Liberals, only a handful enjoy a persona such as P. Chidambaram. He is an elite among elitists, second only to Gandhis, and his gravitas in public appearances suggests of a man bred in arrogance. He isn’t of a light-banter type, back-slapping his friends. Never a dhoti and a khadi shirt has been worn with a swagger which could put  rockstar in shade.

Chidambaram wears a smile which he could patent. It’s a benign, patronizing smile, never warm, only a favour which he is bestowing to his audience. When he speaks, there is this cocked eyebrow judging you on your incompetence. He is that Pope of politics who is used to reverence from his audience.

In a sense, it’s a classic cloak borrowed off from the Nehru-Gandhis: A benevolent knight, God’s chosen one for his people, who must have his cake while the masses must revel in the crumbs. A blue-blooded Congressman never questions the scions; and never lets down the coterie and sycophants who must do his bidding.

The morning after Tihar got arguably its most famous occupant, Lutyens Media who breed and multiply like mosquito do in sewers and gutters, were busy treating the moment as a victory of sorts. Hindustan Times lettered “Chidambaram, Karti get relief from arrest”;  Times of India made much of Supreme Court disapproving of High Court judge quoting Enforcement Directorate (ED) note; The Hindu didn’t forget to mention Chidambaram and son got anticipatory bail in Aircel-Maxis money laundering case;  and Indian Express, the daddy of them all, front-paged “Judge-slams-agencies”.

I mean a heavyweight-like-few-others is in notorious Tihar jail. Chidambaram is a thread which could showcase the entire gamut of alleged corruption in the decade (2004-2014) of UPA rule, reveal the arteries and veins which gutted body India, arguably institutionalized corruption; sterilized bureaucracy and defanged investigating agencies. It has a far bigger implication for the present and the future then a mere judicial custody. Yet our Lutyens Media has just taken a note of his arrest: There are no sermons, no digging up the dirt, no editorial – nothing.

The servile TV channels for once were not too keen on TRPs. None of them stationed their cameras in front of Tihar Jail for images which could have lasted them a week. No helicopters like they did once as Sanjay Dutt was being whisked to the Yerwada jail. These were the very channels who were aghast when CBI men were jumping the fence of Chidambaram’s residence. Yet the TV grabs of the year were not shot, nor archived for posterity. As if they wanted to erase people’s memory, sanitize history.

I scanned the timeline of Shekhar Gupta, Rajdeep Sardesai, Sagarika Ghose etc on twitter and found nothing this morning. JUST NOTHING.  The one of Barkha Dutt though was outrageous. She may have changed media affiliations faster than actors change clothes in a song sequence but her crooked logic is unimpaired.

Ms Dutt is aghast as to why Congress is not taking to the streets on the matter of P. Chidambaram! Could you believe it! Ms Dutt is asking Congress to mobilize public opinion and come out in support of its two stalwarts (the other one being DK Shivakumar). She would rather have the party alienate the people than dump the allegedly corrupt. She is exhorting Congress to defend the two infamous.  She views DK Shivakumar as a fire-fighter for Congress; and can’t get over the fact that the Party has done no better than depute its legal luminaries or arrange just a press conference for P. Chidambaram. She is asking Sonia and Rahul to sit outside PC’s residence and court arrest alongside him. She is asking if Priyanka Gandhi could accompany Robert Vadra, why not here? Barkha sure is a queen of the bizarre.

It is no different to how Lutyens Media treated the Sunanda Pushkar murder (yes, murder now that it has been established she was poisoned). There was no journalism of courage, no intense gaze which could penetrate the layers of deception. Or how they treated the Sonia-Rahul bail in National Herald case, AgustaWestland and many other scams: just in passing. It’s different from the anniversary they run on an Akhlaq and a Pehlu Khan; a Gauri Lankesh or an Asifa Bano.

There is no escaping the fact that a few luminaries and media houses are part of this “eco-system.” This eco-system is willing to ignore corruption, blood stains, violence, seditious conduct and harm to this country as long as it serves their agenda. Their sense of democracy and secularism has a skewed prism. Never lose an opportunity to hang them out to dry.