Bengal begs a solution: Those who ignore history are doomed to repeat it 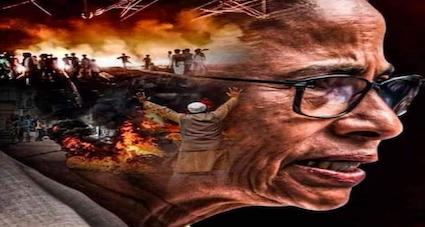 It’s not yet Direct Action Day of 1946, and neither Muhammad Ali Jinnah nor Huseyn Shaheed Suhrawardy are reborn yet but Hindus are at the receiving end. Every hour is bringing home some bone-chilling visuals.

There are images of women being dragged by their hair and clobbered on street; there are visuals of a battered Hindu with blood across his torso; leaping flames which are consuming the poll offices of BJP, one by one.

This is true to the last syllable we heard during the Bengal polls; that people and forces have been marked in case the Trinamool Congress emerged victor which it has now.

The Centre has taken note; the Ministry of Home Affairs has sought report from the Bengal government; the State Governor has expressed his concern to Mamata Banerjee; summoned top cops who have passed the buck; and BJP is promising “dharna”:

Measures which frankly bothers Mamata Banerjee less than a fly on her nose.

There is suggestion Article 355 (secure lives/property) and Article 21 (writ in Supreme Court to ensure so) are invoked.

Yes, the people of Bengal have voted for Mamata Banerjee. But apparently those who haven’t are paying a price with their lives. All lives ought to matter; and not just one over the other. If there is a miscarriage of this essence of governance, the buck stops with the Centre.

The point is, Federalism in India has just acquired a new definition. The Centre and Judiciary could follow the Book to the last sub clause. But States could give a damn. Till they are told of the consequences. Dharnas and notices are the kind of consequences they could deal with till your death centenary is next week.

It’s a template which could pan out in following stages:

Welcome to the mission Akhand Bharat.

Centre has to find a way to avert it. And walk the talk. It won’t stop till it’s stopped. It’s just not Bengal. It could be repeated all over India. And India has entrusted its fate in 303 seats to the BJP. If it can’t protect lives, it can’t protect India.

Domestic terrorism is political terrorism. It’s meant for victims outside the immediate victims. It would affect the tiller in Muradabad; a priest in Bulandshahr; a cobbler in Wayanad; a migrant in Aurangabad.

Some deaths you could count in Bengal. Other “deaths” would happen unknown.