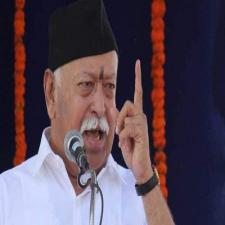 Rashtriya Swayamsevak Sangh (RSS) wants a samwad and it would leave its opponents nowhere to run.

RSS chief Mohan Bhagwat’s clear position on Muslims, reservations, lynching, Indian constitution etc was like an elephant who just walked through the door of the corrupt in their own vice den.

All these years, Sangh grew and grew, preferring action for words, which allowed a cottage industry of dishonest politicians, academicians and journalists to grow fat on global agenda of fundamentalist Islamic and Christian forces—for these two religions alone want to prevail till the world comes to an end.

I deliberately ignore Left for unlike long-standing religions, the innocents are now wiser on them. The jackals who fed on the disaffected now appear flattened under their own tomes.

Earlier, RSS’ silence was seen as the proof of the guilt. Now, that they are behind mike, and on the podium, right in Lutyens’ living room, all we are hearing through the broken glass-panes is: Hey, listen, these are words, just words, for their actions won’t sync.

So, if you are silent, you are guilty. If you speak, a hypocrite. If you act, it’s only token and an eyewash.

Republic of Propaganda. The game was so rigged, why even bother to be on their turf? This couplet more or less sums it up:

(They are killers, witness and judge all rolled into one. Who do you think my relatives should appeal to on the murder?).

The new RSS wants seminars, debates and discussions. It’s a tectonic shift. Their silence didn’t win them over the urbans whose eyes and ears were controlled by the Lutyens’ Media. RSS could’ve ignored it but the devils have wedged a divide. They wanted Muslims to be insecure, anxious, troubled, jittery and skittish and a narrative to be built which would’ve painted Hindutva as murderous, fascist and totalitarians. That’s not good for the Hindus, not for Muslims and certainly not for India.

Never is a more concerted effort needed than now to bridge the divide. Hindutva would lay beaten if a Muslim child is poisoned by the chalice of his parent’s fears and grows into an alienated branch of this country in the cusp of great things. RSS has sensed the danger inherent and hence Bhagwat’s words: “If-Muslims-are-unwanted-then-there’s-no-Hindutva” is a giant leap of faith which needs be repaid in faith.

We’ve seen in recent years how Dishonests are emerging out of their rat-holes. They are fighting for survival. They are dead if their narrative of polarization is given a noisy burial. And that’s the need of the hour. RSS just doesn’t need one Bhagwat; it needs thousands of Bhagwats. They are all out there but need a cohesive force to keep them together; grow and multiply. Their voices need be sustained and spread to every household.

So far most of it is private initiative. An OpIndia here; a Swarajya there; a Litfest in Pondicherry; it all needs a structure; an umbrella which keeps the cement of edifice dry. Only if this bull is taken by its horns, would we be able to stop Kerala and Bengal from becoming another Pakistan and Bangladesh. Polarization built the narrative of the Partition. History must not be allowed to repeat itself. Such a dragon must be slayed by stout hearts, clear heads and strong hands.