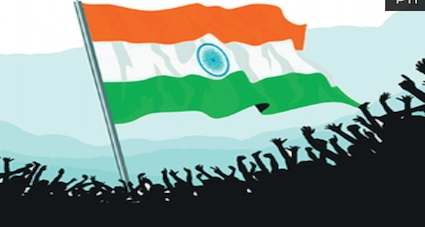 Only, while Modi’s is aimed at us Indians’ hearts, I cry out to government, judiciary and media to let it happen. To me, they seem to be standing in the way.

This might seem a riddle to an innocent but a Arnab Goswami who envies a Vinod Dua; a Kumbh or Kanwar Yatra devotee who throbs in ache on how Bakrid gains in protection; and a Yogi Adityanath who feels a stepson versus a Mamata Banerjee, Arvind Kejriwal or a Uddhav Thackeray would understand the import of my words.

And I am not even touching on how untrustworthy our judiciary appears when it rules on one election and quite different in another; when religious congregations are threat to human lives but not the squatting farmers; when Sabrimalas and decision on Gandhis are locked in vaults without a key.

Media of course doesn’t see any of this crying shame. Almost every story in Lutyens Media is framed against the Hindus:

The killing fields of Bengal; Palghar; Kashmiri Pandits, desecration of Hindu temples etc is all passe. An Akhlaq and a Pehlu are the only lives which matter

Ghar Waapsi is bad but conversions are ok; fire-crackers are health hazards but not the slaughtered-blood ending up in sewer and a treatment plant; Brahmin vs Dalit is truth but an Ashraf vs Arjals is imaginary.

And then there is Government.

Don’t they know that our history is all Mughals and British and almost nothing on, say, Kashmir’s Lalityaditya, never mind his rule extended up to Turkey and beyond Tibet. Suheldev, anyone? Martyanda Verma? Anything on Chola, Chalukya, Devverman or Ahom kings? Many such rules which lasted for more than two centuries are not good enough to be in our history books. Most of us won’t know a Kashiprasad Jayaswal and Govind Sakharam.

And Hindu temples? Their lands are usurped as are their riches, under benign state governments. Try reaching out to Vijayanagar or a Khajuraho and rue the lack of direct access. How are the legacies of Indian civilization kept?

It remains a sore point to many that Bengal is still not under the President’s Rule. You do what you need to do, never mind if a suspect judiciary cook a snook, and our state capitals go into an orchestrated anarchy or the global “democracy” mafia is at your throat.  You frame the NRC rules now; you stride ahead with CAA now.

Dainik Bhaskar is a good start but extend the clean up to all; who all under the media garb carry on their other business interests and this “barter” deal for space-in-print is rampant.

Judiciary is self-regulating. Stop it now. Bring on the Commission which died at the embryo stage itself. Ring in the changes in Constitution. Confront the judiciary and media. Enough is enough.

Oddly, this would be the best way forward for “Bharat Jodo Andolan.” The support across India would be overwhelming; these faceless would acquire a form and bring the fear of god in the hearts of those who sit in judgement, be it in courts or newsrooms. They would stoke up Muslims’ anxiety but then it would be your job, as well as that of majority, to allay their fears.

Once Muslims see infiltrators just as infiltrators and not just Muslims, that there are more subsidies to them by the minorities ministry now than ever in independent India, that lynching happens either way and isn’t state-sponsored as it wasn’t in pre-Modi era; that triple talaq is anachronistic even in Muslim world; that the State doesn’t choose one faith over the other in providing water, health, home and infrastructure; that Universities and jobs are open to all; they would see reason. At least most would see. A fundamentalist Hindu or a Muslim would be hung out to dry in open.

That’s how Mr Prime Minister, you could hope for “Bharat Jodo Andolan.” As long as the masses of this country perceive you, judiciary and media failing in their duty, they would hold a grudge and not be a stakeholder in your mission. If all of you show an even hand, you could expect the same from masses. Your present appeal appears a censure for masses when it should be the other way around. Worse, it makes Hindus feel guilty and Muslims persecuted.

This is war in which India is up against its enemies; You take them on without fear of consequences. If you are accountable, as is media and judiciary, Indians as a whole would fall behind you. If you play at the margins, before long you would be on margins.

Indians by nature are just, law-abiding and honest. They are worried at this cacophony of dishonest. They want empowerment at all cost. You won’t be able to hold it off for long. You make them stakeholders and see how “Bharat Jodo Andolan” springs to life.