Bihar elections are simple maths in favour of BJP-JDU fire: The rest is all smoke 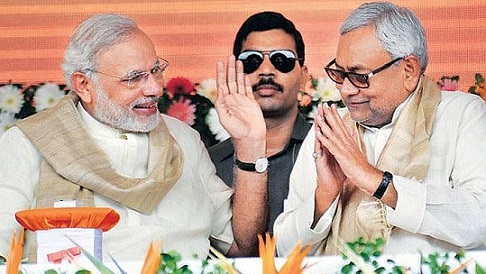 The one thing you know about elections in India is that all we see is smoke and very little of real fire. Political parties are bloodhounds. They leave no stone unturned to win elections. The propaganda machinery works overtime.  A lot of it has to do to confuse voters. A fair bit is also to demoralize the rival workers on ground. Exit polls are more right than wrong and so if you have to stick your neck out, it’s BJP-JDU led NDA alliance all the way. It’s common sense too. Any two who join hands between RJD, JDU and BJP would win. It’s no-brainer.

Bihar polls are different from other polls. It’s hotbed of caste politics, even bigger than Uttar Pradesh. No one party has won on its own alone for decades. And that’s because there are Dalits and OBC (Other Backward Classes) and then hierarchy of castes, sub-castes within them. Most castes and sub-castes have their own favourites among political parties. Such is the caste identity that they stick to each other at all times. A poll arithmetic is sewn beforehand. For last 15 years, the one sewn by Nitish Kumar has largely been successful.

But then Nitish Kumar had Lalu Yadav with him in the last elections of 2015. JDU and RJD were together. Both these parties survive on votes from within the OBC category. JDU has Kurmis; RJD has Yadavs. Call them the regional satraps of larger NDA vs Mahagatbandhan theme. The “third front” makes up of Upendra Kushwaha’s Rashtriya Lok Samata Party (RLSP), Bahujan Samaj Party (BSP), Asaduddin Owaisi’s AIMIM and Devendra Prasad Yadav’s Samajwadi Janata Dal Democratic Party. Kushwaha’s corner came late after he couldn’t win either JDU or RJD on his side.

Chirag Paswan is solo. He lost his father Ram Vilas Paswan, a Bihar and national stalwart, by providence and JDU by design. He swears loyalty to Modi-Shah yet can’t see their chief minister choice Nitish Kumar as worthy and the confusion might well be by design for all you know. But his party, Lok Janshakti Party (LJP) had won only two seats in the 2015 polls. His party had fought 42 seats in 2015 and it’s doing it in 137 seats in 2020. His plans are for future even as we discount his impact in these elections.

If LJP is largely Dalits, so is the identity of HAM (Hindustan Awam Morcha) of former chief minister Jiten Ram Manjhi. They are with NDA. As is Mukesh Sahani’s Vikassheel Insaan Party (VIP). This is a combine which has upper castes (Kurmis), lower OBCs like Mallahs and non-Dushad Dalit votes in its fold. The Mahagathbandhan makes up for RJD, Congress, AIMIM and Left parties. RJD gets its base from Yadavs and Muslims and the latter who don’t lean towards Congress would have AIMIM as its next choice. Then there are three Left parties who at least ensure noise in the prepaid media.

Have we run out of this mind-boggling equations. Well not quite. There is Pappu Yadav’s Jan Adhikar Party (JAP), Chandrashekhar Azad’s Azad Samaj Party,  MK Faizi’s Social Democratic Party and Bahujan Mukti Party which are in an alliance of their own called Progressive Democratic Alliance (PDA). It’s Azad’s initiative now that Hathras tragedy is no longer making headlines for him.

All this make things look messy but they are not. It’s the media which is hellbent in confusing us. They said Sushant Singh Rajput was whipped up to yield dividends in Bihar polls. That Kangana Ranaut would hold rallies. And now Munger tragedy looks plotted. All this was smoke. The basic sum to remember is what I said at the start: Any of the two: BJP, JDU and RJD would form the government. Others would go silent till next election beckons in 2025.

Just to recap, the first phase which was over was brilliant in terms of turnout, Covid-19 notwithstanding. 12 of the 16 districts were Left-extremist violence-prone but none happened. It settled the fate of 71 seats and 1066 candidates. The second phase on November 3 would elect 94 others. And third on November 7 would take care of remaining 78 seats. On November 10, we would know the winners and losers in the 243-seat assembly—a whole lot of them.