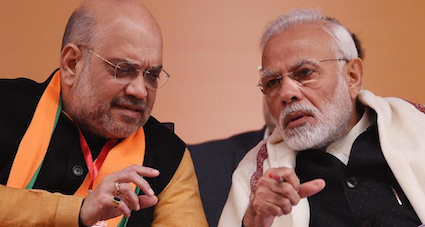 I am disappointed when those who supposedly have ears of Narendra Modi and Amit Shah are swooning that Bharatiya Janata Party (BJP) has had a 25 times jump from its 3 seats in 2021 Bengal assembly polls.

It also appears a fool’s dream when they think ingredients are in place for a 52-course to be served on table when it’s time for the next edition of assembly elections in 2026.

BJP has lost 2021 elections and it would lose 2026 too if they fail to identify they are playing the rivals’ game, instead of being true to its supporters who are the reason they are in their second successive term in the Centre.

It’s right on the money that if Modi and Shah were even 10% of the fascist they are accused of, Mamata Banerjee by now would be penning her political memoirs and her aides Derek O’ Brien and Mahua Moitra would be organising exhibitions of her ghastly paintings.

Far from being a badge of honour, it’s a liability. True fascists continue to enjoy the fruits of power in Indian States, their smoking guns taking care of the niceties of Right and Wrong. These extremists know that Media falls for baton, if it doesn’t for bucks. (Or why Arnab Goswami is no longer harping on Sushant Singh Rajput?)

It’s just not coercing your rivals into submission. It’s also to tell your core supporters you care. Not just with words. But with actions too.

It’s known BJP lost hundreds of its loyal workers in Bengal; hacked, butchered, maimed, slaughtered, mutilated, disfigured, neutered, beheaded. It’s no consolation to their families that BJP sheds tears on public forums. Or their kitchens are still running. When they move out every morning for a bucket of water or stand in queue for grocery or go to work, they see those assassins and rapists mocking at them, promising a repeat more lethal. When every hour is a battle for survival, freebies don’t take care of fear.

In this election, some 100 seats near or on border, have Muslims growing in numbers upto 20 percent. This demographic change, by way of bigger families and infiltration, have shifted the balance imperceptibly. Read this thread to learn seat-for-seat statistics. Muslims have outnumbered Hindus in these border districts.

Those known to have caused riots in the past, have been elected overwhelmingly. No Hindu even contested from Bhagabangola in Murshidabad! Even BJP fielded a Muslim candidate. This is a constituency in which a RSS worker and his family was brutally murdered. It’s a pipe dream to hope that Hindus in the constituency would stand up for BJP when the latter doesn’t stand up for them. Survival is an instinct which always trumps ideology.

Today he wins this seat.

If your voters are left on their own, you can’t hope to call upon them in polls. If Matuas and SCs/STs are your big hope, you ought to enforce Citizenship Amendment Act (CAA). Pandemic or no pandemic, the Act is in force for nearly two years now. When Mamata Banerjee challenges you to frame CAA rules, and you dither, it weakens and not strengthens your chemistry with your voters.

As it does when after years of corruption charges against Mamata Banerjee and her Trinamool Congress aides, all those Rose Valley and Sarada chit scams, there is no persecution to show in your ledger. So traumatised the populace might be by “tolabazi” (cut-money) of Trinamool, it doubts your resolve to get the State rid of rampant corruption. When even Centre cadre in Bengal are left unaccountable. With Trinamool watching and you turning back, what options are your core voters left with?

This Bengal election also has laid out a template for other states. It has shown Muslims are far more committed voters than Hindus. They voted en bloc. They were not dissuaded by the charisma of Asaduddin Owaisi from a faraway land, or Furfura Sharif closer home, or considerable clout which Left and Congress came to hustings with having 70 seats between them in 2016. They drew a blank this time, as did Owaisi and even Furfura Sharif was cast in a bin.

All minority votes shifted en masse to Trinamool Congress. A share of 43% in last polls was 49% this time around. The BJP’s vote share from 40% plus in 2019 Lok Sabha polls dwindled to 36%. Muslims didn’t vote for them; their core voters, for doubt or fear, didn’t either en bloc. And so it was a rout.

Expect Trinamool Congress to do more of what has clicked for them in 2021. Those seats which have voted for BJP have reasons to be scared.  They have it coming. And if BJP continues to mouth homilies, it would turn away even those who potentially have them in mind for 2026.

If BJP is serious on 2026, it shouldn’t look to poach Trinamool Congress MLAs and ministers. Some of them carry the same image you accuse Trinamool Congress with. Ticket distribution should have been done with ears to the ground. It’s given that you need to strengthen cadre base etc, be local, but there is a larger all-India lesson which I think BJP would do well to learn by heart.

And that is, show you carry punch. Show you are with your supporters. Nurture them. Don’t leave them to their fate. They are the flesh and bone on which you stand and walk and nurture your ideology. Or they would be picked one by one.

Everyday, I see some slick presentation and the surround sound which amplifies the voice of Left-Liberals. Lutyens Media is a priceless asset to them, anyway. The truth is, your supporters are overwhelmed. They are divided anyway. You could bring them under an umbrella but you don’t. They become a voice in wilderness. Till they give up. Like voters, you can’t fault supporters too.

It’s also apparent that BJP needs to create local leadership. Muslims in Assam did exactly what Muslims in Bengal have done: vote en masse. Badruddin Ajmal’s AIUDF won 16 of 19 seats contested. All were Muslims. Congress too won 30 seats, 13 of whom were Muslims. But it still was brought to nought since a Himanta Biswa Sarma or Sarbananda Sonowal could prevail over 30-35% of Muslim votes in Assam. They carried charisma.

BJP too needs to decentralize its high command. A few of its stalwarts, like Smriti Irani and Nitin Gadkari, remain unused. There is too much Modi-Shah. Overkill is a reality. Their rallies do have impact but it’s for a few hours. It has several capable men and women. It’s not using them best; as it’s not using its supporters. Everyone is looking over their shoulders—when they deserve a pat in the back. Trust them to deliver; between you two it’s only as much as you could achieve.

What is BJP afraid of? By appearing sagacious, do you think you would gets marks on secularism? Lutyens Media would applaud and the ones in West would be on their feet?

They are out to get you. And they would get you till you say, to hell with you. The only way you could pin them on the mat is by taking a leaf out of Yogi Adityanath’s book. Strengthen your core. Be unapologetic. Do what you think is best to save the motherland from anti-India forces. Bite the bullet.

There is no other option: Learn the lessons or it would be too late.