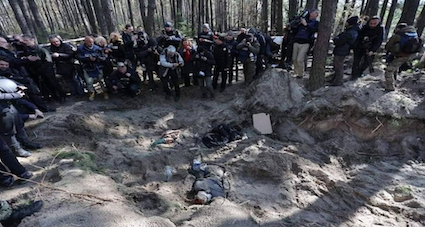 You wouldn’t have heard of Bucha before. Now you know since its mayor has reported of a mass grave of 300 people once the Russian forces left the town on April 1.

There could be several other “Bucha” surfacing in coming days.

It’s no different to the “genocide”; “mass murder” “pogrom” which were discovered and blamed on the dominant Serbs in the tragic story of what once was Yugoslavia in the 90s and has now been broken into seven independent nations.

That it allowed the West—or US and its vassals in Europe—an access to the Adriatic Sea (and thus Mediterranean Sea, the gateway to Middle East and Africa) we would leave for the moment.

If you happen to buy my book—“How United States Shot Humanity”—a result of a painstaking research of a few years in the Balkans, you could go into a depression on what the Empire and its stooge media serves us in the name of humanity but what essentially is a criminal enterprise of brainwashing us as zombies in the service of the Satan.

My book would throw up several names of Foca, Gorzade, Serbrenica and Sarajevo etc in erstwhile Yugoslavia where so-called massacre of “innocent” Bosnian Muslims were undertaken by the monstrous Serbs even though exactly the opposite had happened—much like how Russians are shown to be the evil in the present Ukrainian Crisis.

So a few excerpts from the book below which could make you place the order as soon as you are through with this piece:

The stories of systematic rape of Bosnian Muslim girls and women was all over the media. It was asserted that Serbs ran “Rape Camps” in Foca.  It was termed “genocide”—no less.

The reports claimed that up to 100,000 Muslim women were raped through the Bosnia War. The MS magazine ran a cover story that rapes were intended to produce pornographic films. No such film was ever found!

On January 15, 1993, New York Times ran a photo story with the caption: “A two-month old baby girl born to a teenage Muslim woman after she was raped in a Serbian detention camp.” USA Today of January 13, 1993, told the story of a five-month old baby, presumably the product of systematic rape by Serbians. Only, at that time the war was not even nine months old!

In January 1993, the Warburton Report, authorised by the European Community, estimated 20,000 Muslim women were violated by Serbs as a part of war strategy. That a member of the commission, Simon Veil, a former French minister and president of the European Parliament, dissented is not even in public view. Veil had revealed that the estimate of 20,000 victims was based ona ctual interviews with only four victims—two women and two men!

According to the New York Times, the Croatian Ministry of Health in Zagreb was the main source upon which the Warburton Report based its figure of 20,000 rapes.

Newsweek reported that up to 50,000 Muslim women had been raped in Bosnia. Tom Post, a contributor the article, explained that the estimate of 50,000 rapes was based on interviews with 28 women.

French Television reporter Jerome Bony explained the problem. “When I was 50 km from Tuzla, I was told `Go to the Tuzla High School grounds. There are 4,000 raped women.”: At 20 km, the figure dropped to 400, at 10 km only 40 were left. Once at the site, I found only four women willing to testify.”

The late Nora Beloff, former chief political correspondent of the London Observer, described his own search for verification of the rape charge in a letter to the Daily Telegraph (January 19, 1993). The British foreign office conceded that the rape figures being bandied about were totally uncorroborated, and referred her to the Danish governent, then chairing the European Union. Copenhagen agreed that the reports were unsubstantiated, but kept repeating them.

A gruesome mortar attack in May 1992 killed 20 and wounded more than 100 people who had queued up in a line to receive breads. Sime Miskin Street was strewn with scores of bleeding people, with corpses of seeking men and women with torn-off limbs.”

Washington Post: “A mortal shell landed in a crowded open-arm, armpit in Sarajevo today, killing at least 66 people and wounding more than 200. Horribly mangled bodies and severed limbs lay scattered amid bloodstained market stalls in the bloodiest single attack on Sarajevo’s civilians…there are trucks of dead, there are legs, arms, heads—as many as you want, said a wounded man.”

“The air was filled with the voices of wailing survivors.”

“Bodies were loaded onto trucks and vans because there were not enough ambulances and morgue vehicles.”

This is what an attending doctor, Dr Borisa Starovic, wrote:“I found it very odd that there were no lacerations or puncture wounds on any of the victims. Neither were there any head or chest wounds, only trauma to the lower extremities. The wounds were obviously not caused by artillery shells. They were the results of pre-planned demolition charges, placed by Bosniak Muslim forces, triggered for the benefit of TV camera.”

A classified report by UN commande, Satish Nambiar, Independent newspaper revealed, mentioned that Muslims had massacred their own men. “It was a staged event as details began to emerge.”

“It suggested that Sarajevo’s defenders, mainly Muslims…staged several attacks on their own people in the hope of dramatising the city’s plight in the face of insuperable Serbian odds.”

“The killings here filled the Drina river with bloated and mingled bodies. ..the bodies were often slashed with knife marks and were black and blue…female corpses were always naked…once we picked up a garbage bag filled with 12 human heads.”

Srebrenica made headlines in 1995. According to Red Cross, several Muslim men were reported missing. Washington Post reported that 4,000 armed Muslims had escaped to a nearby town of Tuzla. They were still being reported missing from Srebrenica in reports years later on.

There is simply nothing to document the genocide number of 8,000-10,000 Bosniak Muslims.

There were gory descriptions of carnage, mass rapes, disembowelment, even massacres of children in the media. However, a UN investigative team reported on July 24, 1995 that they could not find a single eyewitness to any atrocity

“This is not war anymore. This is slaughter, massacre.”

The UN officials found that the hospital in the Gorazde, reportedly destroyed by Serbs, basically needed a broom to clear up the rubbish. It was still functioning.

The commander of UN troops in Bosnia, British Army Lt General Michael Rose said the Bosnian casualties around Gorazde “were closer to 200 than 2,000.”

No wonder it is said that history repeats itself—more so when its creators use the same tool every time they wish to engineer and then encase a crisis: Be it Foca once and Bucha now.

(In case you are up to it, please go through the evidences against I mentioned on the prevalent Bucha narrative yesterday.)