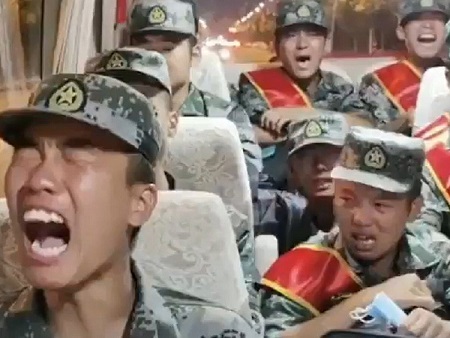 With the tensions between India and China along the Line of Actual Control (LAC) doesn’t seem to be ending soon, a video showing Chinese soldiers crying while they are on their way to the disputed border with India has gone viral on social media.

According to Taiwan News, a group of young People’s Liberation Army (PLA) soldiers can be sobbing and singing a Chinese military song called Green Flowers in the Army in the video.

In a rebuttal to the mockery of its soldiers, Chinese media slammed the Taiwanese media, saying they had deliberately misinterpreted the emotional video.

As per China’s newspaper Global Times, who is also a mouthpiece of the Chinese government, the video is recorded “when the soldiers were bidding farewell to their parents”

The newspaper also added that the Taiwanese media “tried to use all kinds of explicit hints to shape the image of the PLA fighters being ‘afraid of war’, when describing all the key information, the author used vague terms such as ‘reported’ and ‘probable’, which seemed very guilty.”

The video was posted by Pakistani comedian Zaid Hamid on Facebook. The comedian, in his full sarcasm, mocked the Chinese soldier with his comments on Facebook. He wrote, “seriously hurting the motivation level of our Chinese brothers… We Pakistani support you China, Stay Brave”

Taiwan News claimed that the video was originally posted on the WeChat page of Fuyang City Weekly and later it was removed.