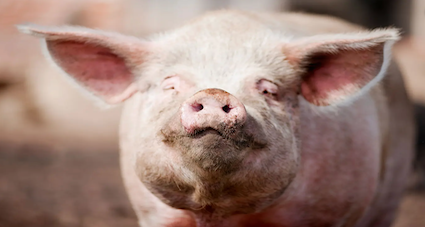 Many decades ago, sailing on a ship with over a dozen Nationalities, pretty much all of whom had enough reason to hate the Angrez, I learnt from one of their neighbouring country fellow-goraas on what made the Brits (and the Scots, for that matter) tick, and why they were such absolute pigs in more ways than one.

“Pigs can feel pain and fear and isolation causes them stress. They can learn from each other, show empathy, use mirrors to locate food and enjoy being given brain-teasers. This briefing outlines recent investigations into pig sentiency from the scientific literature.”

Nothing wrong with pigs. I enjoy pork more than other meats, for example, and have seen pigs be pets as loyal – or even more so – than dogs. I have also seen movies where pigs are used to dispose off human remains, usually in very violent ways, and then the pigs themselves are eaten by other humans in due course.

Which is why I start this delayed review of RRR the movie by congratulating Varun Grover, him of the “Kaagaz Nahee Show Karoonga” fame during the anti-India movement referring to CAA (Amendment Bill) protests and more. His translation into Hindi the lyrics for the song “Komuran Bheemado”  is very interesting, for the repeated use of the Urdu word “zulmi” to describe the tyrant. For those who may not be aware, “zulmi” pertains to foreign tyrants from a particular community who reached India with sword and book, and then enslaved the Indians. Thus causing great “zulam”.

The foreign Zulmi ver 2.0, portrayed so very well by Roy Anderson, is represented by Scott Buxton. Here is an interesting review of this composite Governor of Telengana of the 1920s. Not many reviews have covered the goraas in RRR, but they do play a pivotal role, so check this out.

Two other gori characters are also of note. The Shrimati of Scott Buxton, designed to relate to Queen Victoria, is shown as a mean bitch. The type who would place broken bottles in the garbage bins, for example, or piss in leftover food. John and Jane Bulls, by the way, are great for pissing on each other as a form of sexual release. That’s why they drink so much warm beer. And that’s also why the whole Palace-of-Governor in RRR reminds me so much of that Museum to Slavery, the Victoria Memorial in Kolkata.

But the other gori character, the niece of Shrimati and Shri Buxton, who manages to get attracted to both the Desi Naach Indian heroes, is even better – showing midriff in her last scene in the movie, something that no gori from the Land of Warm Beer and Warmer Piss, would ever do. She would be a very good desi naach partner going forward.

RRR, the movie, has an essential deconstruct – it takes a few segments of minor histories from India’s struggles against foreign invaders, which appear to not fit with the pacifist majoritarian history thrust down our necks, and brings a lot of sense as well as explanations forefront. In a manner never done before by the morons of UrduWood. And it does this in a manner which is technically brilliant as well as comprehensible by all – as a matter of fact, many from our so-called educated elite simply can not relate to it.

For them, this song that rolls at the end with the credits, and a simple question – how many of the freedom fighters shown can they recognise? Each turban and drum shown during this song tells a story – how many do we know?

If ever there was a movie that spelt out how India got rid of the colonial invaders, with a lot of blood and weapons, this was it. Say what anybody likes, this is the true Freedom Movie, from India. As an example to the rest of the free world. That the Colonial Pigs moved out only when they felt pain, fear and isolation.

Because? Because the drums were getting nearer.