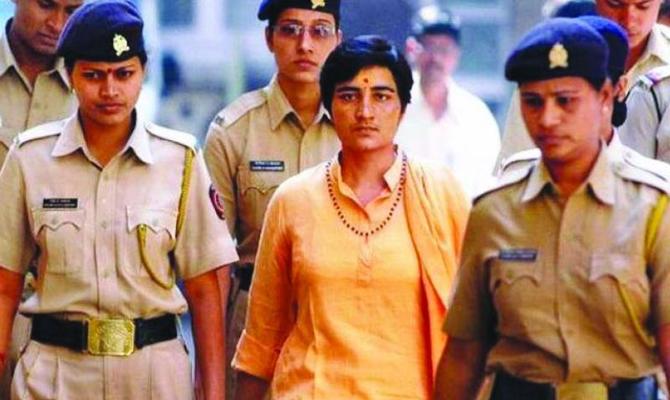 Beyond the cacophony on Sadhvi Pragya Singh Thakur, readers must not overlook two important fallouts.

One, Congress, the peddler of “Saffron Terror” theory has completely zipped its mouth. There’s no reaction from Congress official handle, none from Rahul Gandhi, none from Kapil Sibal etc. Digvijay Singh, like a rat frozen in the glare of car headlights, has welcomed Sadhvi Pragya as an opponent from Bhopal constituency. Ghulam Nabi Azad has mumbled something to the effect that what else you could expect from BJP. There is a complete shutdown of Randeep Singh Surjewala, a motor-mouth. Priyanka Chaturvedi and Divya Spandana, who could outmouth “Basanti” of Sholay, are similarly silent.

Two, Bharatiya Janata Party (BJP) no longer is apologetic in being the voice of Hindus. It wants open debates so that the fake bogey of “saffron terror” peddled by Congress in its two terms (2004-2014) are kept in public consciousness. BJP has stood up for around a billion people. It’s a rallying call against the narrative which Jihadi-Left-Liberal injects in national and international veins. “We would be our own judge, not you” is the simple message.

It was between 2007-2010 when “saffron terror” became an official propaganda in India. A host of tragic bomb blasts, Samjhauta Express  Maleagon or Ajmer Sharif etc, were framed on the lines of “saffron terror.” RVS Mani, a former under-secretary in the Ministry of Home Affairs (MHA), openly named Digvijay Singh as one who laid the foundation of Hindu terror and spread it. More tellingly, “In the name of Hindu terror, he saved real terrorists using government resources. Ariq Qasmani, the accused in Samjhauta Express blast had escaped. In Mecca-Masjid blast caase, Bilal escaped…but there’s no Hindu terror,” Mani said.

Much of it was done to frame Rashtriya Swayamsevak Sangh (RSS) as a terror organization, a prelude to a possible ban on them. It would’ve been straight from the book of Mahatma Gandhi murder where Nathuram Godse was projected as a working RSS member (falsely), where Veer Savarkar was framed by some creative manipulation (falsely) before the third step of banning RSS was arrived at in 1948. Manohar Malgaonkar’s book The Men Who Killed Gandhi, is almost an eye-witness account as he interviewed and pieced together ever single member involved in the Gandhi murder conspiracy. It’s a must read for all citizens of India as it recounts how the conspiracy broke Savarkar in spirit and health; how a very top Indian politician pulled strings to have him incriminated.

Sadhvi Pragya suffered unspeakable torture under police custody for eight years, to the extent that it left her paralysed. The Malegaon case slapped against her was so shallow, it should have been thrown out in half an hour. She had sold off the motorcycle–used in crime– much before the tragedy happened. The witnesses which were furnished against her retracted their statements. We have her video where she says she had no idea why police were indulging in such terrifying brutality against her. She was also made to hear pornographic audio in front of male jail inmates.

Yet none of our conscience-keepers said a word. None from Lutyens Media; none from Human Rights Commission, Amnesty, National Commission for Women, NGOs—none. None from Mayawati or Mamata who speak about “dignity of women” whenever a camera or mike is thrust in their faces.

Please don’t forget to read this piece of OpIndia which shows the extent to the hate which men and women from the Bollywood fraternity (Swara Bhaskar and Javed Akhtar) and Lutyens Media (Rajdeep Sardesai and Sagarika Ghose) pour on BJP’s choice for Bhopal constituency. Never ever would they discern a common thread running in the propagation of “saffron terror.” You could allude it to their bias or simple ignorance. In either case, it doesn’t help.

Today, Congress is silent because it knows it’s caught in their own noose. If they condemn Pragya Sadhvi, the Hindu vote conclusively would go to BJP and not just in Bhopal. If they praise the move, it would shut out their lifeline, the Muslim voters. That’s why they say that lies don’t take you far. Be it life or politics.