Darjeeling is just one of many troubles for Mamata Banerjee 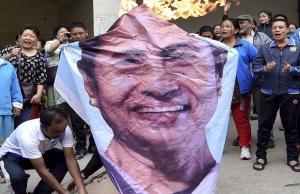 Darjeeling goes to poll on Thursday and the troubles of Mamata Banerjee seem to be converging on most counts.

The hill station which has been a stronghold of Bharatiya Janata Party (BJP) since 2009 holds a grudge against Mamata Banerjee and her party Trinamool Congress (TMC) for causing unprecedented violence in the quaint little town.

The 2017 firing led to death of 11 Gurkhas and there is a palpable hostility against Mamata Banerjee and TMC goons.

The 104-day strike in 2017 was called by the Gurkha Janmukti Morcha in protest against Mamata’s decision to include Bengali as a medium of instruction in the schools of the hills. It say 11 people killed at the hands of the police.

Darjeeling is not just the only storm brewing in Mamata’s cup of woes. The West Bengal chief minister is falling foul of every institution of this country—be it CBI, Election Commission or Supreme Court. It’s another matter though that it still has not evoked any censure from the so-called watchdogs of democracy, the media.

Supreme Court has noted with concern that “something serious was going on” in West Bengal after custom officials alleged that state police stopped them from screening the luggage of wife of Abhishek Banerjee, nephew of Mamata Banerjee.

Election Commission is already doing its bit by stretching the elections in West Bengal to each and every seven phase of the poll and relieving police officials from poll duty allegedly due to their proximity to the Trinamool Congress (TMC) state government.

Election Commission (EC) is also reconsidering re-elections in Cooch Behar, one of the two constituencies in West Bengal which went to polls in the first phase on April 11, the other being Alipurduar, after incidents of violence and rigged polling emerged via independent sources.

TMC goons have attacked BJP workers during Cooch Behar elections a few days ago and devised novel ways to ensure majority vote in favour of their party. Reports have emerged that either TMC intimidators stand behind a voter and ensure he/she votes for no other than TMC or have applied nail-polish on BJP button so as to identify who has voted for the “lotus”.

While the shameful conduct against working CBI officials in February in Kolkata is still fresh, it seems TMC is pulling no stops to ensure it’s a law into its own and is not adherent to the practices of democracy in India.

BJP is putting up a spirited fight despite its leaders being denied to land in the state for electioneering, intimidation and brazen muscle-flexing during elections, be it panchayat, assembly or now Lok Sabha polls.

Everyone understands situation in West Bengal is spiraling out of control. Paramilitary forces were present only in 40 out of 100 polling booths in Cooch Behar and incidents were reported throughout the polling day on April 11.

OpIndia has reported an alleged audio clip of a TMC leader in Cooch Behar who is asking his cadres to ensure 100 per cent votes in favour of the party. He is allegedly heard asking workers to rig votes openly. BJP has submitted this clip to Election Commission for review. They sat on a dharna outside the Election Commission office in the wake of Cooch Behar polling.

These early indicators apparently point at a violence-ridden elections in rest of the 39 Lok Sabha seats in West Bengal in the coming days and weeks. As said, Cooch Behar and Alipurduar, have already gone to polls. The details of seats and elections dates in the remaining six phases in West Bengal are as below:

Meanwhile our Lutyens Media which leaves no stone unturned on reporting any alleged Model Code Conduct (MCC) violation in the ongoing polls, have nothing to write in editorials against TMC and its party leader for open murder of democracy in the state of West Bengal.