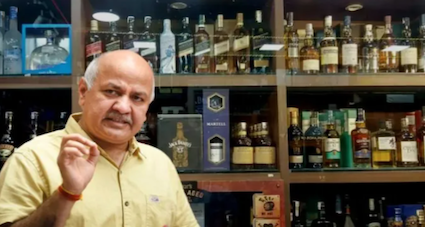 Delhi’s Liquor Policy, such as it was and is, is back in the news for all the wrong reasons. With allegations, investigations, suspensions, return to Government owned and operated vends and more, the dust as it flies is getting all sorts of political tinges and hues. But at the end of the complete cloud cover, fog and haze, is a simple truth – the liquor policy was all about everything but beneficial to the Revenue of the State.

To start with, the basic premise of the Liquor Policy was a fixed annual fee, and after that, a 1% + 1% tax structure. In other words, once the fixed annual fee was recovered by the licencee, it was profit and more profit all the way.

The third flaw was the sub-division of Delhi into different zones for allotment. Sellers will put up shops where customers want them. By forcing sellers to put up shops in specific locations all that was achieved was that shops did not come up there.

Fourth was the Airport Zone. It seems that the Airport operators were not taken into confidence in the first case. How smart was that, for landside operations, at India’s primary and biggest airport?

What, then, would be a solution?

The barcode and sticker regime is, at best, cumbersome and at worst, easily circumvented. The direct from manufacturer to retailer route is one option where control can be maintained, by using a centralised bonded warehouse or stockyard method, using bonded sealed trucks, which serves both Government and Private retailers.

But most of all, any liquor policy to succeed in India, must promote domestic and regional brands of alcoholic beverages, especially what are known as Low  (0.5% to 8.0% v/v) and Medium Alcoholic Beverages (8.0% to 15.0% v/v). Delhi must be the only State in India where huge amounts of imported liquor (whether BIO Bottled in Origin or BII-Bottled in India) are made available.

And therein lies the rub – a large amount of “imported” liquor comes from no idea where, which is the magic of switch Bills of Lading. But yes, the bottle and label look very impressive, and foreign enamoured customers in India are totally happy.

Any liquor policy for the Capital of India needs to start with a simple premise – it is a show-window to the world of Indian brands. Whether IMFL or what is demeaningly called “country”. I know diplomats who take the effort to procure Indian brand wines and single malts and rums and gins which are not available in Delhi. But as Indians in Delhi, this is very difficult for us, so let us start there?

Imported alcoholic beverages can have a separate policy where buyers can go, gladly, and pay high sums of money for, mostly, re-bottled plonk.

(For those looking at timeline of Delhi’s liquor policy, mired in controversy, this link could be useful—NewsBred)