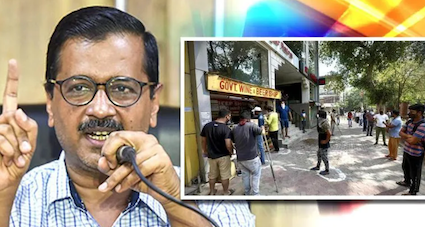 Delhi has been blessed with a new excise (liquor) policy for the year 2021-2022 which on the face of it claims to have as its first and primary objective –  “to ensure generation of optimum revenue for the Government, eradicate the sale of spurious liquor/non-duty paid liquor in Delhi and transform the consumer experience.”

It also claims that the said policy shall “put in place a simplified duty and pricing mechanism that is periodically reviewed.” The policy, for some unknown reason, appears to be undated. But it was uploaded on the 5th of July 2021 further to a very specific Order from the Honourable Delhi High Court.

The said Policy, meanwhile, has received media attention – especially in context with “premium” outlets and “home delivery”. Very admirable, but if one does a fast forward, one of the more surprising parts of this policy states that

“4.2 Simplification and Rationalisation of liquor pricing including Excise Duty and VAT:

The existing Excise Duty plus VAT is in the region of 200% and more, and this policy proposes to bring it down to 1% + 1% = 2%. Nothing could be nobler than this for the vast tribe of tipplers of Delhi it would appear, but then the devil is always in the fine print, so I continue.

The fine print in this policy is simple – the right to decide on the MRP, it would appear, is now with the seller. Of course, yes, in consultation with the Government. “After the completion of the tendering process, the L-7Z licensees will be given two weeks time to submit their inputs regarding the MRP to the Excise Commissioner. The Excise Commissioner will fix MRP for each product after taking into account the inputs from L-7Z and L-7SP1 licensees and the price of the product in the neighbouring States i.e Haryana, Uttar Pradesh, Punjab and Rajasthan. The Excise Commissioner will also provide an opportunity of being heard to each L-7Z and L-7SP1 licensee as prescribed in Rule 54. Similar process will be followed at the time of introduction of new brands during the course of the year. The licensee is free to give concession, rebate or discount on the MRP.” So far, so good. Why States like Himachal Pradesh (where fruit wines retail at around 250/- rupees for a full bottle) and Madhya Pradesh (excellent wines from ancient ‘tribal” options, like Mahua) have been left out bears some thought.

But there are repeated references in this policy to “square feet” instead of “square metres”, vague terms like “global/international standards” and then of course, that old bugbear – “foreign” brands. While our own traditional liquor is disdainfully referred to as “country liquor”. I know diplomats and foreign visitors who pick up Indian traditional liquor by the case-load, examples would be feni from Goa, fruit wines from Maharashtra / HP / Manipur, toddy from Kerala, rice wine from Nagaland, and kiwi-wine from Arunachal. Or single-malts from Bengaluru. Dark rum from India has been a staple export for decades now.

In a day and age when AtmaNirbhar has brought a new strength to domestic brands of not just “hard” liquor but also traditional wines made of fruits and flowers, this “Liquor Policy” for Delhi attempts to be a one-stop promo for yet unknown foreign brands. It is another matter that counterfeiting in foreign liquor is what it is, where even the best of us can not tell the difference between red, black, green, blue or simple brown. Isotopic “fingerprint” analysis of alcohol may well show that Bordeaux has moved closer to Beijing?

And the complete calculations of revenue loss to the Government, or diversion once sales cross a point, and thus causing a loss to all the Citizens, including those who do not drink, by reducing the VAT+Excise Duty from 200% to 2% – is still to be declared by the Delhi Government.