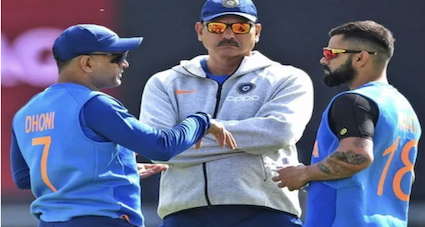 Nobody would resent Mahendra Singh Dhoni by his corner. I remember Ravi Shastri telling me once he is one of the humblest cricketers he has come across. Virat Kohli of course owes his career to MS for he had all but ceded his place to Rohit Sharma in the Perth Test in 2011. Mutual respect is the basis of all relationships and not just conjugal.

So it should work. Each would lend a yielding ear to the other. Virat Kohli would still decide his eleven; Ravi Shastri still is excellent with his tactical nuances and Dhoni could make players feel bigger than they actually are. Arguably, if a Dhoni asks one of the lads to step into Talibans headquarters today, he would believe in their saintliness.

It’s also true Dhoni is not exactly how his legend has been built. A Yuvraj Singh or a Gautam Gambhir have been nasty to his machinations in the past. Both of them are a little volatile, quick to anger, unable to get even as MS sets his pieces on the puzzle with care and promised returns better than Byju’s. There is little ripple on the surface though the currents below go far. I also remember a prominent present umpire confessing over a breakfast how much abusive Dhoni could be on a cricketing field and tease the stump-mic useless.

It’s not to say Dhoni is not his own man. He could strike without warning. Like he did to Sourav Ganguly and Rahul Dravid early in his career as one-day cricketers. I remember Sourav in Perth when he learnt he had been dropped from the one-day team in 2008. The present BCCI president didn’t expect a rookie to assert so early who was the boss. Dhoni went into the triangular with largely a young team, and much as we journalists predicted a massacre, he actually won the trophy, never mind the defining innings in the two finals was played by the daddy of them all, Sachin Tendulkar (117 not out; 91).

Dhoni is India’s T20 saga in flesh and blood. Chennai Super Kings is the Vatican of T20 nerds. It’s been the soul of IPL; across venues, across borders. His template doesn’t work on slow pitches of Chennai alone; his Matthew Hayden, Shane Watson and Dwayne Bravo were useful beyond the expiry date, a sweet irony to when he walked Indian seniors to the door. As it was when he asked a soon-to-retire Anil Kumble to captain for a day at Kotla.

You could call it man-management, his flip-flops a measure of his flexibility, a respect and not disdain to the conditions and opponents. But he always had the right bowler for the moment, the right stroke and corner for a six off the final ball, the escape acts he managed as a routine. It made mature men surrender to his command, eyes closed.

Dhoni won’t throw his weight around as a mentor. He won’t ruffle egos. He would take it as it comes, advising when solicited, dropping a quiet word with a jumpy youngster when needed. He was humble when the world was at his feet. His retirements were his calls. He has had his fill with glamour, riches and power. In his heart, he is still that quiet lad of hinterland who prefers a Ranchi to a Riviera. He is still some seasons away from coaching the Indian team, if that indeed is on his horizon.

Then why mentor? Why this one-off fling? Maybe glory for India is the underlying cause, not just for the BCCI and team management but also Dhoni. If India wins the trophy, after some eight years in wilderness, it would befit India’s stature. It would be a victory for all, for the nation, and not just a halo around one individual. That’s how a team sport ought to be; a whole better than its parts, a step up from hero-worship which the present India is ready to shed for the outcome and not just near-misses.

The hard-part is, you and I could justify Dhoni as mentor on these lines. The tough reality is, Kohli’s team is too independent for BCCI’s liking. Bosses don’t like losing control, never mind if they strived no different when in whites themselves. They aren’t exactly inviting Vienna Philharmonic to hail our heroes who have bagged Australia and have England inside its palm.

Kohli has carried it off with a rude countenance, thumbing the selection you have had in your mind, with his own quirks and convictions on the paper he exchanges with the rival captain at toss. He is no fool to go with a team which he doesn’t believe in, so let’s leave out this conspiracy we carry in our minds due to excess of Bollywood in our younger days.  It’s his team but the BCCI would like to call this its own too for which no credit comes the latter’s way.

If India wins the T20 Cup, it won’t just be halo of Kohli-Shastri alone. Dhoni would be deemed to have played a major part, never mind the switch from IPL to T20 World Cup being a matter of just two nights. Shastri could return to his farm and his puppies, his friends and family, with shared glory, reduced attention, credits which he could justifiably feel robbed off.

If India doesn’t win the World T20 title, well Shastri would’ve merited his departure and BCCI could afford to not offer a goodbye. Such are the petty affairs of men and our world. Egos run in the background, daggers hidden for the right moment. That’s not how it should be but that’s how it always is, isn’t it.