Do today’s editors do journalism? Or you can’t survive in newsrooms of our times 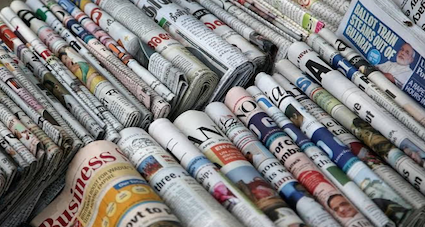 Former editor in chief of the Outlook group, Ruben Banerjee is convinced that a significant chunk of the Indian media is run by the management – it means the CEOs – and not editors. Probably that’s why he named his book,  Editor Missing – The Media in Today’s India.

Banerjee also has a yellow jacket as a cover, probably he is hinting at what he calls yellow journalism that he feels has flooded the media. I have a feeling what he means is that editors like him are missing from the market. And editors who still have their job rarely do journalism and routinely tow the line of the government.

He wants everyone to know he is of a rare breed, like a Django Unchained.

For decades, Indian editors have tried to be both bold and beautiful. Some called their chair the second most important slot after that of the Prime Minister, some wept at the altar of the ruling dispensation after being told their names are not in the Padma awards, some told politicians that they would happily lobby for the politicians so that the politicians get a solid post in the cabinet. And some openly said they do not mind showing manuscripts of their interviews to some big corporate honcho before flowing the same into the pages of their daily. And some shamelessly cut deals to drop explosive investigations for cash, rarely supporting their very own intrepid editors. And some said they were bold but shamelessly went to lobbyists to solve problems of their groups. Once Arun Shourie – he was not into politics then – had planned a television show titled, Bomb your editor. The show did a pilot but never saw the light of the day.

The seat of editors in India is always a hot seat. The man in that seat has to delicately balance news and earnings of the newspaper or news magazine, or new channels. You cannot dump one for the other, an editor cannot say he does not care if subscriptions are not growing, viewership is dwindling. Banerjee has made it clear in the book that he has not liked the big Indian newsrooms. Except for a few, very few places he worked and liked, the rest were real hellholes.

So let’s focus on the book and the big, big reason why Banerjee hit the wall, and left Outlook. I spent some lovely years at the magazine with Tarun Tejpal and Vinod Mehta and I was personally very keen to read Banerjee’s book, and check out the reasons. I remember another Outlook editor who also got the sack was Krishna Prasad, he was called the Sancho Panza of Mehta.

Banerjee says he planned a cover that loudly proclaimed the absence of the government during the deadly COVID second wave. The May 24, 2021, cover said Missing and asked Indians if they had any idea of the whereabouts of the Union government.  And that did not go down well with the BJP-led NDA government. So, according to Banerjee, the Outlook management very quickly and silently replaced him with Chinki Sinha. I have a feeling that was a double whammy for Banerjee. It was tough for him to digest the elegant Sinha walking into the editor’s room and occupying the chair. Banerjee was not the only one shocked, another senior editorial member of Outlook, waiting to fill that seat for years, resigned in disgust.

So let’s return to the core issue of the sack. Do readers or viewers in India get upset when editors are replaced? I don’t think so. No one cares; it is a strange world. The editor is relevant as long he is in the chair, once out he is in the dumps. That is not the best thing to happen but editors rarely get support when they fight. They are mostly loners.

Banerjee was no exception. He chased news, not the corporate honchos or politicians. He should have done that. He forgot he was operating in  Delhi, where power lies in the wheels of the sedans the rich drive. He did a book on Naveen Patnaik but one cannot say he was close to the Odisha government and picked up loads of advertisement campaigns. Banerjee has talked about the advertisement campaigns that came from Yogiland but argued he did very balanced reporting while questioning Adityanath. Now that does not happen in India anymore. Either you are with them or without them.

Banerjee should have realised he was an editor, not a funky reporter. He was the man with the magic wand, he was the magician Outlook had hired to change its fortunes. Sadly, he did not play ball. Rightly, he remained a journalist. He should have realised every government would have wreaked havoc if criticised in a manner Outlook did. It would be wrong for him to blame the BJP-led NDA. No one likes to be criticised. And very few are unforgiving.

The book does not confine itself to the events leading to Banerjee’s exit from the top editorial job at Outlook,  but raises larger questions about the way the media is fashioned in this country.  Owners of most media companies have interests in other businesses and there is a section of journalists in India who feel that it becomes a liability for the companies when the time comes to take a sensitive editorial call. Especially when it goes against the government. Is it really the case? The very journalists who want top companies to walk out with their investments in the media do not offer an alternative solution. For some strange reasons, they hate a corporate honcho owning a media outlet. They fail to realise like everything else, media is also a business.

And there are other issues at stake in the media.

What an editor often forgets is that he can only lead and direct, and without a team of good reporters, he doesn’t amount to much. Often, those editors who have been reporters themselves forget what it is to survive in those trenches. What is missing from the book is Banerjee’s dealings with reporters and how he ran the bureaus in Outlook. For now, those experiences are only told in journalistic circles. Banerjee’s book, which is a memoir at best, does not talk about those and how he was dealing with investigations which were once the hallmark of Outlook during the terms of most of the editors before him.

Every editor thinks the journalism he is practising is the best, and no one can match him. But somewhere the editor forgets that he has been crossing the thin, red line far too often. An editor must remember he has to be a part of the system to change the system. The bull has never worked in the bone china store. In the big arena watched by hundreds, the bull is brutally gored, killed. And people clap.

Editor Missing – The Media in Today’s India is an  honest confession, but at what cost? I hope Banerjee bounces back. I do not want him to be the boy on the burning deck. India needs good editors who will raise the genuine banner of revolt.