Does Express has anti-Hindu agenda? 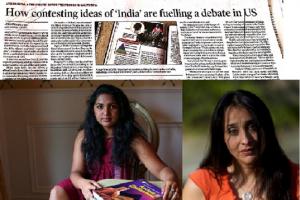 Indian Express, with its story today (image above) leaves no one in doubt that it’s following an anti-Hindu narrative.

It can only be termed an Indian Express story, despite crediting it to New York Times, given the way it has omitted and manipulated, the original story which appeared in NYT on May 4, 2016.

It took them a good part of a week to present this “revised” story. Take a close look at the original story and what has appeared in Indian Express today (image above).

Before I list the shockers, to save your time, first a gist of the matter is important:

California, through an education committee, is in the process of revising texts in history books where Pakistan and Nepal are NOT referred to as part of Indian subcontinent but as one of South Asia. It has brought a spirited resistance from Hindu American Foundation, which through its social media campaign (#DontEraseIndia), has reflected the anger of Californian Hindus, who number half of the 2.5 million Hindus living in the United States.

Indian Express obviously doesn’t believe in the cause of millions of Hindus in India, US and elsewhere. It wouldn’t matter to it if the very identity of India is distorted and future generations are crippled culturally so that India never rises to its full potential.

Have a look at Express’ omissions and manipulations in today’s story:

“The victors are said to write history.”

(Omitted: The very opening line is conveniently cut in Express. Why? Could it be because it would show the worthiness of Hindu American Foundation cause? Or that the present attempt in California is a part of the cultural imperialism?)

“State educators have also heard debates about the portrayal of so-called comfort women in World War II, the Armenian genocide and discrimination against Sikhs in the United States. But none of the arguments have persisted as strongly as the fight over the Indian subcontinent.”

(Omitted: This paragraph would’ve shown the US and Western powers in poor light.  Or that Sikhs are being discriminated in the US. More so, that Indians are up in arms to protect its cultural and historical legacies).

“Vidhima Shetty, a high school freshman, told the committee that using the term South Asian would be akin to asking her to change her name.

“Names are what define us as people; they represent character and personality,” she said. “The board is confusing our cultural terms with geographical terms. By removing India as a term from the textbooks that leaves Indian-American children with no ethnic or cultural identification to turn to. When we acknowledge ourselves as South Asians, us Hindus are forces to re-identify ourselves as something we are not.”

(Omitted: Such a powerful reasoning is cut out in Indian Express. Neither Vidhima Shetty, nor her convincing views, are relayed to Indian readers.  Is it because Shetty’s views are a clincher?)

“During a hearing last month, dozens of Indian students spoke out against the changes the South Asian scholars have suggested to the commission, accusing them of “Hinduphobia” and robbing them of selfhood.”

(Omitted: No mention of students protests on Hinduphobia at all in Indian Express).

“Ms Suhag Shukla (executive director of the foundation) is also pressing the state to include the idea that Hindus in India have a historical acceptance of religious diversity, allowing Jews and Zoroastrians to come to India as they escaped persecution in nearby lands.”

(Omitted: Predictably, Indian Express cuts it out. How could really Hindus be shown to be tolerant? Isn’t against the narrative of Indian media against the Modi government?)

“The Hindu-American group is hardly alone in pushing for changes in the way ethnic groups are portrayed. The state’s committee also heard from Filipino, Korean and Mexican advocate. There have been a lot of groups that are eager for us to include their history in the framework.”

(Omitted: Predictably left out by Express. For it would have shown an attempt in US to wipe out the cultural identity of migrant populations, not just Hindus, and strengthened the Foundation’s case).

“But the Hindu-American group has been particularly active in trying to shape California’s history curriculum. For the last decade, it has been pushing — unsuccessfully — for public schools to give more attention in the curriculum to the Hindu religion and Indian culture.”

(Omitted: Predictably by Express. For it would have shown California’s history curriculum erasing the Hindu history and cultural legacy systematically for a decade now).

(Manipulated: This was the original headline in New York Times.

And see what our admired newspaper offers the headline to its readers:   How contesting idea of “India” are fuelling a debate in US.

NewsBred would advice Indian Express that instead of going to town about history text book revisions in Rajasthan, it should justify it given how imperialists powers rewrite history of subjugated nations—as is being done in California now. It should also be gracious enough to give credit where it’s due—to Hindu American Foundation for fighting the cause.

And for god’s sake, don’t manipulate and omit facts to suit your agenda.