Does Manmohan care about India or Congress? 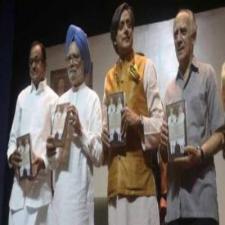 Does Manmohan Singh care about India or Congress?

If he cared about India, he would’ve earned the gratitude of a billion-plus Indians by stepping down as Prime Minister as his party spawned a million scams.

He would’ve done more than offer a mere apology for the 1984 Sikh genocide and certainly made sure he didn’t share the same stage with Sajjan Kumar, a prime accused as 3000 Sikhs were lynched in the Capital.

He would’ve addressed his countrymen at important junctures of his 10-year rule and not been a mere statue who didn’t react even as Rahul Gandhi tore up his government’s ordinance and humiliated him in public.

Such a background of his is not in consonance with his daily tirade against communal violence and mob lynching that he accuses have become widespread under the regime of Narendra Modi.

If he cared about India, he would’ve confessed to the citizens that the worst 18 communal riots in independent India’s history came while his party was in power. Six of the worst communal riots occurred while Dr. Singh was the Prime Minister. In 2012, there were 640 incidents of communal violence. A year later, the number was 473 in 2013.

As for lynchings which has Dr. Singh most upset about, he showed no such remorse when 25 lives were lost to mob-lynchings in 2012 itself.

This doesn’t seem a man in love with India. This is the picture of a dishonest man who yearns for a secular, plural and equal India but wouldn’t utter a word about Kashmiri Pundits who have been driven out of their own land. His plurality beats a hasty retreat when Hindus face communally marginalization in states such as Bengal and Kerala. He bemoans Kathua and Unnao but has no time for unfortunate rapes in Uri or in a madarsa. He would rather have a secret dinner with a top Pakistani politician than make a point to them about martyred soldiers and their unfortunate widows, victims of terrorism from our neighbours.

Those who profess by Dr. Singh for his honesty and integrity must be told the difference between the two traits. You are honest if you told your wife you cheated. But you lack integrity when you cheat on your wife, nevertheless. Honesty is convenient; integrity is the stuff a man is made of.

Now 86, Dr. Singh needs a mirror that reflects his true self to him. He has lived in shadows and deceptions for too long. He owes his allegiance to Congress, and not to India. His countrymen know better of him than a compromised mainstream media and academia of the land.