Don’t be fooled: In the name of Taliban, US is creating a new ‘Axis of Evil’ at our door! 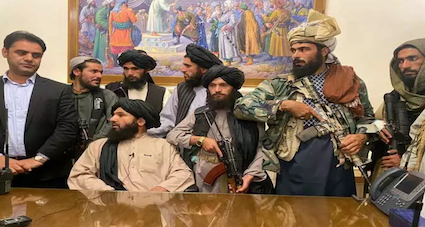 I write in rather simpler words for an average reader to understand the situation in Afghanistan which the so-called geopolitical experts would dismiss as too simplistic and missing the nuances.

In five frantic days, Talibans wrapped up the Afghanistan for themselves (see the image below).

On August 12, three major cities were captured simultaneously: Ghazni, Kandahar and Herat. On August 13, Talibans had reached within 50 kms of Kabul. August 14 and the siege of Maidan Shahr, the gateway of Kabul, had been laid; Jalalabad had been taken control of. Kabul had been encircled from north, south, west and with Jalalabad gone, cut off from the east.

Yet Talibans largely stayed in the outskirts of the Capital: It told its forces not to enter the city or cause civilian bloodshed and to capture it without combat. It didn’t stop here: It stayed put long enough to allow the United States to withdraw its personnel, diplomats and other assets.

It brought to an end the longest war in the history of United States and the one it lost after two decades, like it did in Vietnam.

Over three lakh Afghan soldiers and police, armed by the US, were not enough to hold 60,000 Taliban fighters at bay.

And please also do remember: Talibans had no qualms about breaking the agreement they had with the Americans. They decided to sweep into Kabul, knowing fully well the consequences.

Or perhaps there were no consequences.

It all began in December 2001 when George W Bush invaded Afghanistan to punish Al-Qaeda, for its assumed role in 9/11, and to hunt down Osama bin Laden. Two years later he had invaded Iraq, in March 2003, on the lie that Saddam Hussein was harbouring “Weapons of Mass Destruction” which he never did. The United States  made Iraq the base through which it spread chaos in Syria and Libya and didn’t mind throwing its Kurdish allies under the bus.

Afghanistan became the US base to play mischief in Central Asia and against China, not to say the unlimited riches it managed through the global supply of illegal opium-poppy harvest. There was also this bombastic “War on Terror” as Bush earmarked Iraq, Iran and North Korea as “Axis of Evil.” Middle East was never to be the same again through the meddling of United States: In the name of fighting terror, it created “good terrorists” against the bad ones, threw the region into chaos, and destroyed tens of millions of lives.

On May 2, 2011, the US got its man, Osama bin Laden, in Pakistan. On the face of it, it should have ended their occupation of Afghanistan. But they stayed on in the name of “human rights”, “democracy” and “liberty”, propping up one puppet after another on the Kabul throne, and ostensibly creating an Afghan army which was capable of taking on Taliban.

But it didn’t happen. Afghan army was nowhere to be seen when the Talibans came. That Talibans were the new big boys in the town was acknowledged by the US itself when it concluded an agreement with them in February, 2020 in Doha, Qatar, agreeing to withdraw all American troops from Afghanistan as long as Talibans ensured that al-Qaeda wasn’t allowed a foothold again in the mountainous country.

Talibans were now on good terms with the Western bloc. This is what Gen Nick Carter, the UK chief of the General Staff said: “I think that the Taliban is not the organisation it once was, it’s an organisation that has evolved significantly in the 20 years that we have been there…”

So Talibans, once bad boys, became good boys.  And we are not to question how does an Islamic Caliphate, which believes in Sharia, would be the beacons of “liberty and equality” and “human rights” or “gender equality.”

Stunningly, it’s the same they did with Al-Qaeda: Opposing them in public but supporting them, as long as they came with a different name.

Stay on the Al-Qaeda bit a little longer to understand how Uncle Sam operates on the rest of humanity.

In the name of supporting “good terrorists”, US furled Syrian war with arm supplied to Al-Qaeda terrorists. These terrorists today completely control the Idlib province in Syria. They sometimes became rebranded as al-Nusra Front or at other times as Hay’at Tahrir al Sham (HTS) for PR purposes. All this while, they carry US arms and equipments on the mission assigned.

Hay’at Tahrir al Sham (HTS), also known as Organization for the Liberation of the Levant,  has direct ties with the American government. It’s leader Abu Mohammad al-Jolani is considered an “asset” to US strategy in Syria.

So if US is asking Taliban to stop al-Qaeda growing in Afghanistan, and it ostensibly is also on good terms with both, what’s the logic? What’s the game?

It indeed is called the Great Game Theory. This theory says it’s easier to predict and control the selfish behaviours of men or groups as long as you could reward them with “incentives.”

It’s nothing but enslavement and encourages its slaves to fight each other for crumbs, never questioning the hand that holds the bread. It’s a fun game to the imperialists which was first noticed in Vietnam where mock fights were staged to shape public opinion and support.

Today, US fears the Belt and Road Initiative (BRI) of China which could arguably free the region of the US-made swamps of chaos. It’s afraid Russia would make it a double whammy. Forget the “War on Terror”—it’s to stop the expansion of China it’s pursuing through its BRI. The US is wary now that Iran is set to join the Shanghai Cooperation Organisation (SCO), controlled by China and Russia.

It’s coming together of Iran, Russia, China, Pakistan and Central Asian ‘Stans which worries the US. By keeping Afghanistan on boil—an inevitable Taliban vs rebranded Al-Qaeda dogfight—it would create a new Axis of Evil, involving Taliban-Pakistan-China.

On the face of it, all this is not good for India. There is an inescapable lesson though for the New Delhi: Never trust the Americans. They couldn’t care any less about the “ally” and “friend” anthem they play in public. New Delhi should pursue its Iran, Russia and even China’s interest unabashedly. If hostile neighbours bare their fangs, India is strong enough to deal with them on own terms. It’s in a sticky spot, no doubt, but a bitter lesson if learnt well would be worth it.