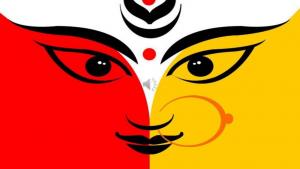 The worship of Shakti, the “Durga Puja”, has inspired principal Hindu resistance across ages. It has inspired Hindu women to military defend their cultural heritage against invaders. Whenever Kings of Mysore went to war, he sought the blessings of Chamundeshwari Devi in Mysore. From poets and scholars, to warriors all over India, Goddess Gouri, in the multitude of her forms, is close to the hearts of millions of Hindus.

Most states boasts of at least one major Shakti Peetha: Mahamaya in Amarnath (J & K), Chinnamastika at Chintpurni (HP), Savitri at Thanesewar (Haryana), Varahi at Panchsagar (Uttarakhand), Lalita at Sangam (near Allahabad), Sarvamangala at Gaya (Bihar), Kalika at Kalighat (WB), Kamakhya in Neelachal (Assam), Tripura Sundari at Udaipur (Tripura), Jayanti at Nartiang (Meghalaya), Avanti at Bhairavparvat (MP), Bimala at PUri (Odisha), Vishveshwari at Sarvashaila, Mysore (Karnataka) and Sharvani at Kanyakumari (Tamil Nadu).  Indeed, Shakti Peethas exist from Hinglaj (Baluchistan) to Sitalkunda (eastern Bangladesh) and from Manas (Tibet) to Nainativu (Sri Lanka). Tribes from the Jaintias of Manipur (Durga), Bodos of Assam (Durga), Gorkhas of the Himalayan belt (Kali) to the Santhals of West Bengal and Jharkhand (Durga) and other tribes of Odisa, Chattisgarh (KalI) worship more mainstream forms of Shakti.

Sri Aurobindo, who was at the forefront of the anti-Partition agitation in Bengal, organized armed insurgencies against the British and began his lectures and speeches often with a prayer to Chandikaamba.

Revolutionary Veer Savarkar, an atheist himself, composed “Jayastute”—a prayer where he saw Freedom as his Goddess.

Subhas Chandra Bose was devoted to worship of Goddess as Shakti, especially as Durga or Kali.

Yet it is also true that Abrahamic religions have a deep-rooted aversion towards worship of Goddess. They provide theological sanctions which in turn has inspired dastardly attacks on Hindus practicing their religion since India’s subjugation to foreign powers—Islamic and British. The collusion of India’s political class has perpetuated this trend in the Indian sub-continent where Hindus are persecuted for pursuing their religious beliefs.

In Bangladesh on Saturday, Rapid Action Battalion (RAB) killed two suspected militants who were “preparing a major attack during the Duga Puja.”

News reports have come in from the same country that “state-sponsored hooliganism” destroyed “Durga images” in many parts of Bangladesh even under a so-called “minority friendly” Awami League government in Bangladesh.

The Daily Star has chronicled how the Hindu festivals have been targeted in a systematic manner. Jyotirmoy Barua, an advocate of the Supreme Court in Bangladesh said: “Attacks on temples and festivals have become a common phenomenon…in the last two weeks in 15 districts, at least 22 Durga Puja pandals were vandalised by the local Mulism. BDnews24.com reported on September 27 that 92 out of 408 puja pandals at Rajshahi have been declared as risky by the police!.”

The US State Department report on “International Religious Freedom” mentions attacks on Durga Puja in 2013: “Attacks against Hindus continued throughout the year.”

In Pakistan, only 360 Hindu temples remain in existence; even smaller number are functioning. Thousands of temples have been destroyed since 1947. Attacks on miniscule Hindu community during public worship are also very common. On March 18, 2014, Hindus celebrating Holi were attacked with acid by Islamist goons. During the same festival, Islamists attacked the Hindu community centre and a temple was burnt down in Larkana.

In Hooghly district, Durga idols were vandalized as chrnociled by IndiaFacts.

National Liberation Front of Tripura (NLFT), a self-confessed Christian-ist group, has carried out several attacks on Durga Puja. In 2008, the NLFT set off bombs in Agartala during Durga Puja. Further, in 1999 and 2000, the NLFT had issued bans on the Durga Puja.

All Abrahamic faiths define God as masculine and dislike idol worship. If Islam frowns up worship of any Goddess, there is a history for it. The early battles of Prophet Muhammad were against Pagan Arabs in Mecca who worshipped three Goddesses—A-lat, Manat and Al-Uzat. In India, Sir Jadunath Sarkar had this to say about Islamic practices: “In addition to the obligation to pay the poll tax (Jizya), the Hindu were subjected to many disabilities by the very constitution of the Muslim theocracy…Finally, in the exercise of his religion, he must avoid any publicity that may arouse the wrath of the followers of the prophet.

Bengal in particular saw several assaults on Hindu public festivals. Vijaya Gupta, a contemporary of Husain Shah, Sultan of Bengal (1494—1510 AD) has detailed incidents. RC Majumdar has recounted many more instances of similar dread in which the Hindus of Bengal lived, even during the reign of Husain Shah, a supposedly noble king.

The disdain for Hindu festivals continued in the British times. Throughout the Muslim and British regimes, Hindus were often denied permission to play music in proximity of mosques even during Hindu festivals.

(Radhika states: I have used various sources for this piece but am primarily indebted to DailyO where the below three-part series was a great help