EU in India: And not-so-veiled threat on Indo-Pacific 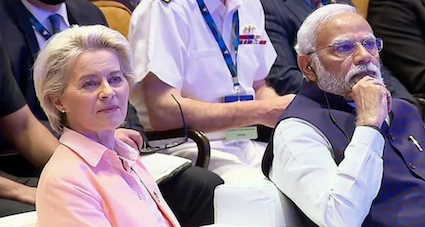 Today, when the European Union President reaches Delhi and makes statements like “Ukraine war will impact Indo-Pacific”: EU chief Ursula von der Leyen said the outcome of the war will not only determine the future of Europe, but also “deeply affect the Indo-Pacific region and the rest of the world”, then at the very least I take this as a veiled threat to be considered seriously.

Having carried cargo as well as humans and livestock to and from war-zones, the core observations that I had were –

So what does the EU Chief really means when she says that the Indo-Pacific region will be “deeply affected”?

Today, the Indo-Pacific region is the most peaceful region in the world, barring localised tensions. Including, for decades, the Indo-Pak issues – which are not strictly “Pacific” rim. East of India, the Russia-Ukraine battle or war, call it what you want to, does not really impact anyone. Even in India, now that our Indian people are back, it is no longer front of mind.

For centuries now, Europeans have come to the Indo-Pacific region, stolen our lands and more – and worse, commanded our soldiers to fight each other, taken loans from our merchants to finance these wars – and then abandoned both of these categories as soon as they shook hands between themselves.

A big example is the way the mercenaries Robert Clive and British East India friends chased Jean Law and French East India friends up and down the Ganges  –  and both were being financed by the Johari Jagat Seth and his friends. Eventually what happened?

The British and the French, who were also fighting in their American colonies, made up, shook hands, said Hip Hip Hooray and/or sang the Marseillaise, and thus was born Canada as well as the US. The Spanish and the Portugese divided South America amongst themselves. Great Britain along with the Netherlands got the Antipodes, and thus was “discovered” Australia and New Zealand.

(New Zealand is named after the Dutch province of Zeeland. The part of Holland that was and still is sinking. Earliest global warming proof. Thus, “New Zealand”.)

The Germans and the Italians were somewhere in Africa. Russia was always busy trying to find a decent warm-water seaport.

And here in India, after Wandiwash and an assortment of battles along the Ganga, poor Jagat Seth and friends got rolled down the Monghyr Fort into the waiting mouths of the crocodiles below, all debts from the French and the British to the Indians were given a hair-cut or simpler, the neck was sliced off, while the French factory near Monghyr became the oldest tobacco unit still operational in India.

But now we read our history better.

Dear Europe – please fight your battles in your own backyards with your own soldiers and using your own money. Once you finish your money, your wars will come to an end, anyways. Then we will send you fuel-efficient vehicles, on which we are the world’s leaders now, in case you had not noticed.

Sorry about the hard words, but as ex-seafarers, we knew and know how to make hard observations.