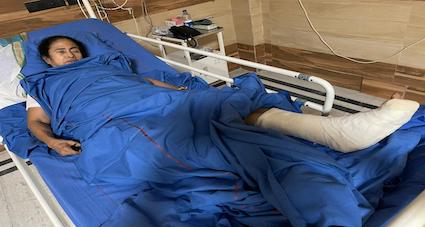 We could guess 4-5 people being paraded to press by West Bengal police, efficient that it is, soon. Sometimes the crime fits the story; in politics it’s the story which fits the crime. The construction of a narrative, you see, must hold its pose. Too much is invested for it to wither too soon.

Narrative to what end? It’s a valid question. A typical end for a politician is power. But then the Science of Power is inexact. You could have done all the good work, “India Shining” of Atal Behari Vajpayee for instance, and could be out of power for 10 years. It’s this nature of beast that politicians leave nothing to chance. Anyone who could promise the golden rainbow, even a Prashant Kishor, is tolerated.

So Mamata wouldn’t know if her Nandigram “attack” would yield goods. But chances are the State would swirl on burnt effigies, all-Bengal demonstrations, with the carefully planted media with its right angles and crafted trajectory.

You would agree we didn’t see the “truth” in our newspapers today. Go to any Social Media and there are intrepid reporters speaking to eyewitnesses, each one of them claiming that the “attackers” were not “4-5 persons” but a three-foot iron stump that hit Mamata’s car and that her police personnel secured ice for her hurt leg from a nearby Mighty Mishtan Bhandar in the market. But it’s out-voiced, ignored by our prepaid media, at his or her majesty’s service, to fit the dictated narrative.

Not that sympathy doesn’t have value in politics. Nehru, Indira, Rajiv all made a meal out of tragedies. The death of all three brought its own high tide of sympathy. Emotions cloud reason.

This is what Mamata aspired in Nandigram. She has little to showcase on infrastructure, industries, jobs etc in last 10 years. Her captive Muslim votes are divided for the moment. She claiming to be a Hindu and going to temples is a course correction too late in the day though. Hindus know how Imams have been favoured ahead of Pujaris; Muharrams over Dussheras; La-Ilaha-Ilallah over Jai Shri Ram.

Bengal of course deserves better. It’s been waiting for its redemption for close to a century. The road to the Partition was strewn with millions dead in Churchill-made famine and Jinnah-Suhrawardy”s Direct Action Day. One Subhas Chandra Bose was erased in deed and mind. Then the misrule of Congress-Left-Trinamool broke its back. Now BJP is its best chance, for Bengali Hindu’s homeland, despite the Guardians having locked up the State in its care, the key dropped in Hooghly.

Trinamool has chosen Mahashivratri today when it would out its manifesto. It’s also the day when Suvendu Adhikari, her beta noire, would be seen in all his pomp and pageantry in Nandigram. Trinamool Congress would blur it with screams on Mamata. Nothing odd here for propaganda, and not performance, has carried the day for 10 long years.

Sure Mamata won’t be in hospital for long. But she won’t be idle. Nor would be Election Commission be, nor the Centre, who all are itching for a probe. Whosoever gets out first, would steal a march. I expect Mamata would “arrange” her facts so that “attack” in itself becomes a sideshow. Prepaid media would love that noise, those poor 4-5 persons, paraded to cameras and notebooks, down to their last details, with a background “dope” which would din in our ears till the other-truth is drowned out.