Express on JNU: Devil quoting from the scriptures 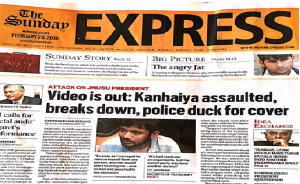 If you are an Indian Express reader you have just been told: you are the dumbest, stupidest, bumpkin, buffoon, idiot, thick-headed, retarded, imbecile reader on this earth.

It’s your choice to live with this tag, readers.

Or why would their lead story of today (February 28, 2016) “VIDEO IS OUT: Kanhaiya assaulted, breaks down, police duck for cover” has no relation at all with the real report, smug as they are with the pig that they believe you are, readers?

Now what this headline tells you: It is that there is video which shows Kanhaiya assaulted, breaks down, police duck for cover, isn’t it?

Spotted the difference? (don’t tell me you are really what Express thinks you are).

The Headline tells you there is a video of “Kanhaiya assaulted.’

The report tells you the video is of “Kanhaiya’s disposition” and not of assault.

In other words, Express believes that you stupid readers wouldn’t go beyond their headline (they actually know their worth, folks). Even if it is the lead story!

Now the next question which crossed my mind was how did they get hold of the video? A smart piece of journalism? That made me look for the SC panelists. One was Kapil Sibal (a multiple minister in the previous Congress government); another lawyer Vrinda Grover who is a board member of GreenPeace whose license to collect foreign funds has been cancelled by the Modi government. Actually Sibal has also been in the programme board of Bill and Melinda Gates Foundation which has been hauled over to Supreme Court by a writ petition.

I might be suggesting a NGOs+Congress+Marxists+Media collusion here but so dumb are you readers that I am confident I could get away with it without you suspecting anything.

It’s a rogues’ gallery with Express passing the board-room bulletin as news for us asinine readers.

And don’t you believe anyone loves cricket in this country. On a Sunday edition, there is no front page mention of India beating Pakistan on a cricket field. Never mind this was India’s only seventh T20 match against arch rivals this millennium and that Virat Kohli played a knock which Sachin Tendulkar would’ve been proud to own up. (May be, showing Pakistan in a losing, poor light would’nt suit the agenda).

Fortunately, inside there is a full page interview of about-to-retire Delhi police commissioner, BS Bassi. He has replied on relevant issues but newspaper won’t put a word of it on the front page.

Bassi puts it as it is: without any spin, full of logic and reason. All those reporters and editors who have been baying for his blood, beat a hasty retreat. All that posturing went out of the first window. So here’s what Bassi said on key issues (it’s an abridged version of his quotes):

On The Actual Sedition Case: It’s an open-and-shut case (wow). Under section 124A of the IPC it’s a grave offence. It’s been declared valid by the Constitution. (For police) It’s an extremely easy case.

The law says: “bringing in hatred or contempt or exciting disaffection towards state by words or signs or visible representations.”

I am going to crack this case because I know these are the guys who have done it.

Country has to deal with issues in Northeast, Chattisgarh, Jharkhand and J and K. We have to have a law to deal with anti-national activities.

Debate happens within constitutional norms. But if it’s an anti-national activity, then it doesn’t remain a debate. Society survives because we respect our Constitution. If all of us start disrespecting our Constitution, the country will be destroyed.

Nobody is letting police do the job. Society as a whole should’ve cooperated with us.

On Kanhaiya, Journalists Beaten Inside Court:

No footage is available of Kanhaiya being beaten. Journalists were still able to cover the event.

I would call it a technical riot because a real riot means arson and people’s heads being broken.

On Journalists Being Questioned:

It’s our job to ask involved persons and seek their reactions (as part of investigations). The thing has been made bigger than the actual event.

There, you have it.

The thing has been made bigger than the actual event. A case under trial has been considered bigger than over two dozen lives lost in the Jat stir. The Jat Stir case that has an aide of ex-Haryana Congress Chief Minister Bhupinder Singh Hooda, in an audio, apparently egging on a Jat community leader to escalate the violence.  But that apparently doesn’t deserve any space in our beloved newspaper.

Don’t you think the front page deserved this headline (or even in inside pages):

So we now know the devil who has been quoting from the scriptures. Who thinks bark is bigger than the bite. Who doesn’t know that it’s truth which can set it free.

The devil can cite scripture for his purpose;

A goodly apple rotten at the heart.

In today’s world of deception and lies, truth is a revolutionary act. It’s up to us readers to hold the flag of truth high. And don’t be the fools that our newspapers think we are.