Express, Kejri have begun ‘rudaali’ on Pfizer: The things they would never tell you 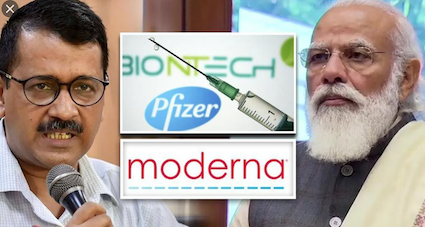 Delhi chief minister Arvind Kejriwal has gone to town demanding Centre must procure vaccines from Pfizer and Moderna as they have refused to deal directly with him. In his eagerness to put all his responsibility in the Centre’s basket, the chief minister is shockingly ignorant of the process of procuring vaccines, the ramifications of which can be monumental.

And It’s not just Arvind Kejriwal.

Lutyens Media is also on an overdrive to run down the Modi government. Indian Express has run a story on its front page today claiming that the Centre is dragging its feet having refused the emergency use authorization for Pfizer’s mRNA vaccine.

It’s been over a month and a half now, India lost a lakh and a half lives between February 3-May 24 but India is no closer to getting Pfizer and Moderna because they are far back in the queue of nations seeking these two vaccines, rants the newspaper.

The truth is Pfizer has been constantly “pressurizing” the Indian government for signing an indemnity bond before agreeing to a deal to send its vaccine to India. These are the legal bonds that protect the company from being sued in case the vaccine ends up causing any side effects. Without it, t in the company would not be held liable even for its acts of negligence, fraud, or malice. If Pfizer sent the wrong vaccine or made errors during manufacturing, nobody could challenge them.

India has not given any indemnity to any manufacturer of a Covid-19 vaccine against liability for any severe side effects and has maintained a strong stance in the case of Pfizer also.

The Indian government source informed that the government isn’t keen to do so in the future as well. “Why should we sign it? If something happens, a patient dies, we will not be able to question them (Pfizer). If somebody challenges it in a court of law, the central government will be responsible for everything, not the company,” he added.

“But haven’t these vaccines passed clinical trials and haven’t shown any severe side effects? readers would ask.

Well, Pfizer has been widely rolled out in many countries including Britain and the United States and has been tested majorly on American or European populations but as medicines may behave differently in Indian populations considering the different genetic-makeup, the Drug Controller General of India (DGCI) had made it mandatory that any new vaccine that has completed Phase 3 vaccine studies outside the country must undergo “bridging trials” in India, a rule that has been a part of Indian regulations since the late 1980s

The same pharma company which was first to apply for emergency use authorization, withdrew its application after India insisted on such a trial as it wasn’t keen on conducting the “bridging trials.”

Unfortunately, there is a little public discussion on this issue. While people consider the Narendra Modi-led government is just being overly pedantic, it is the strong resistance from the  Modi government that hasn’t allowed these pharma companies to milk the profits by putting thousands of lives at stake.

Covid -19 outbreak is like a once-in-a-lifetime opportunity for them, not to save lives but to earn profits in billions. Pfizer is trying to eke out as much profit and minimize its risk at every juncture.  Nevertheless, no matter how much these international pharma lobbies “bully”, the Indian government has made it clear they will not allow them a free field.