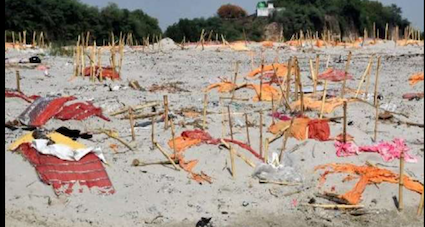 In my humble opinion, four newspapers constitute the core of Lutyens Media: Indian Express, Times of India, Hindustan Times, The Hindu. The digital spillover could be counted as ThePrint, TheWire, TheScroll etc, most of which are headed by men of the same stock. India Today does a good job of keeping the pretence but that’s only by comparison. In news TV channels, NDTV and ABP are fellow brothers in arms.

In the second week of May (10-15), all of them had stories on dead bodies floating in river in Uttar Pradesh. These were the days when the Lutyens Media was doubling down on Uttar Pradesh, not just because of its rising Covid-19 cases but also because the State is headed by Yogi Adityanath who they hate only second to Narendra Modi.

A cursory search landed me with these links to these Media houses, reporting on the floating bodies in river, which you could access by clicking links on their names: Indian Express, Hindustan Times, Times of India, The Hindu, India Today, The Wire, The Print, The Scroll. You could find a similar outcry in NDTV or ABP.

Now these media houses act in concert with Western media. They amplify each other’s voice. Lutyens Media quotes this as what’s been reported in (click links with names) New York Times, Washington Post etc. The global wire agencies such as Reuters or AP supply such stuff with glee. Together, they leave readers or viewers no scope to formulate a contrarian view. The citizens are left with no option but to believe that Yogi Adityanath administration has left the state “ram bharose”, an opinion voiced by Allahabad High Court for which it was later pulled up by the Supreme Court.

These Lutyens Media or their twins haven’t heard or told readers about Shringverpur or Phapamau. Click on the links to know about the religious or cultural significance of these two spots in the Hindu heartland. These two are townships which fall along the Lucknow-Prayagraj highway. Both run alongside The Ganges river. Both for centuries have been used for burying bodies by people from distant lands, even outside from Uttar Pradesh. For lack of burial spot, some just float these bodies in the river. Sometimes the burial is poor and hence they float out.

Hindus do burn dead bodies but millions, from rich to poor, also believe that untimely deaths, or an outcome of cancer or leprosy or leukemia, need to be buried and not burnt.

A Hindi daily, Dainik Jagran, has today published an account, the images of which they had shot as long back as in 2018 ahead of the 2019 Kumbh Mela in Prayagraj. They now sent a team to such burial sites alongside The Ganges river. And spoke to people in the business of burying, the priests, among others.

Pandit Rammurat Mishra is 85 years old. For decades he has been witness to dead being buried alongside the sands of River Ganges in Shringverpur. He says not just untimely deaths or “uncurable” diseases, but even dead bodies out of a snake-bite are buried on the banks of the river. People come here from distant districts. It’s a tradition to bury them on the banks of the river. A similar tale is narrated by one Nankau Pandey. One Pankaj, a Kanpur-resident, far from Shringverpur or Phapamau, says that his uncle chose his burial spot himself in preparation while he was alive. He chose so because his mother too had been similarly buried in these sands.

Now such dead can’t be buried on these sands. Because the pressure built by Lutyens Media is forcing the local administration to prevent such happenings. Emotions or age-old customs have no relevance only because Lutyens Media, alongside their Western twins, have a campaign on to run India, and particularly Yogi’s Uttar Pradesh, down.

If you carefully look at reports in Lutyens Media, or headlines, you would see “river” being mentioned but never “The Ganges.” Ostensibly, its meant to deny any implied cultural significance of bodies buried, many of which float out because of the tide or poor burials. It’s not to say that a few of these deals haven’t been due to Covid-19. Or a few have chosen sands for burials for lack of resources to do the final rites. But to term a custom as a proof of collapsing Uttar Pradesh is such a wicked agenda.

India could only survive if you and I are better informed.