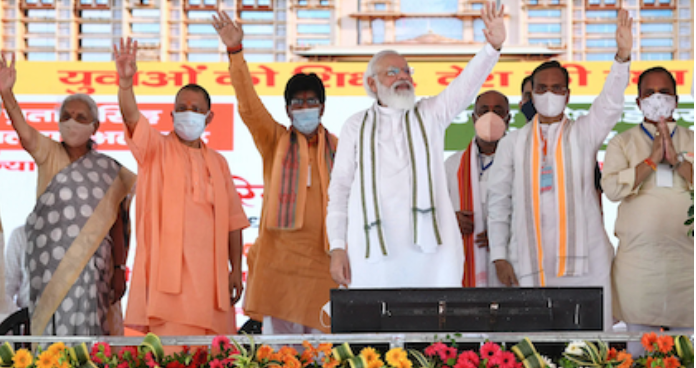 For a change, Indian Express has got it right. It views the prime minister Narendra Modi heralding a state university in Aligarh in the name of a “Jat King” Raja Mahendra Pratap Singh as wooing the farmers in the “protest season”. It has missed out on UP chief minister Yogi Adityanath visiting Dadri in Greater Noida next week to unveil a statue of Gurjar emperor Mihir Bhoj but be sure the newspaper would wail no less loud on its front page.

For western Uttar Pradesh is important to Bharatiya Janata Party. The party swept the region in successive general-assembly polls of 2014, 2017 and 2019 and would like to do an encore in a few months time. It guards its 25 Lok Sabha and 77 Vidhan Sabha seats of the region with the passion of a lover.

You wouldn’t have missed out on various farmers’ welfare measures in recent times, including clearing of most of sugarcane farmers’ dues pending since 2010, a small matter of Rs 1.42 lakh crores; withdrawal of cases against farmers for burning stubble and the promise that no electricity would be snapped even if the payments are pending. Wheat and paddy procuring by the state government has gone skywards.

It’s not just the UP assembly polls. The results would’ve direct influence in the Presidential elections once the term of Ram Nath Kovind ends in 2022. BJP is keen it wins as many as it could in UP; and in Uttarakhand, Punjab, Goa and Manipur too. Every assembly seat won would reduce its dependence on allies in NDA who could turn out to be Badals and Thackerays of tomorrow. Why, even Nitish Kumar is playing coy in Bihar. Presently, the NDA is marginally below (0.05 percent) the required electoral college votes in the Presidential elections.

The thrust of this piece though is not UP assembly polls or electoral maths. It’s to stress how our democracy dumps reforms for populist measures. A forceful compact minority nearly always forces the hand of majority. We have the recent instance of Bengal where Muslims consolidated to the extent that it’s sacrificed its Congress, Left or Furfura leanings in favour of Mamata Banerjee’s Trinamool Congress. The mission was to keep BJP out at all costs. Hindus were almost twice in numbers. But they were fragmented.

Prasanna Karthik, a policy advisor to late Goa chief minister Manohar Parrikar calls it Prospect Theory: Impact of a loss is twice as powerful as that of the same quantum of gain. He quotes the example of last Goa elections: In January 2018, Goa taxi drivers went on a strike as they feared Ola and Uber was coming. The measure would’ve had the approval of Goa masses. Yet Parrikar climbed down: He didn’t want to annoy the minority of taxi drivers and please the majority of his citizens, even though the taxi drivers could’ve influenced no more than a mere 4 constituencies in the 40-seat assembly.

For Parrikar knew that when elections come, the majority would’ve multiple issue to influence their votes. Ola and Uber entry wouldn’t have weighed in. But for taxi drivers, it would’ve been one single, solitary issue. It’s called the Dictatorship of the Minority.

That’s why you see the protesting farmers meandering on even though from general public to media to Centre to judiciary everyone is aware it’s a political protest and that majority of India’s farmers stand to gain and not lose by the farm laws. Yet the farm laws continue to be in abeyance. The dictatorship of a minority forces the hand of political powers. That’s how reforms are scuttled by vested interests of consolidated minority while the majority, with its fragmented priorities, loses out. For political parties know this game we call Prospect Theory all too well: Impact of a loss is twice as big as the same quantum of gain.

The same has been the case with the land acquisition bill. Or the electricity bill which missed its date in this Monsoon Session. Or Centre’s dithering on CAA and NRC. For a BJP would fear the consolidate minority vote more than it would cherish the fragmented majority leanings.

So when BJP’s supporters criticize its ambivalence towards protesting farmers, or post-poll violence in Bengal, or forgetfulness on CAA or NRC, they must appreciate the constraints of democracy which is like slab-bound feet in the ocean of democracy. It’s not like China where no such Prospect Theory of consolidate minority vs fragmented majority is a mill around your neck. That’s why China forges ahead with its reforms and upward trajectory. That’s why India, with diverse language, religion and cultural heritage, appears rooted to a spot.

How do we get around to this dilemma? How could we repair our democracy to suit the trajectory of this nation? How could fragmented majority be made to see the agenda of consolidated minority? Well, let’s put it this way: If the majority wants to empower BJP, it needs to stop being fragmented on the lines of vested interests, castes, language and regional moorings. It needs to pull its weight. Or in criticizing BJP, one would be barking up the wrong tree.