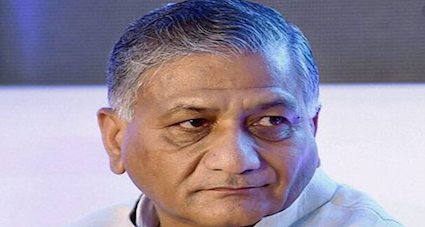 The Congress MP, Shashi Tharoor took to Twitter and said that if the coronavirus had hit India under the UPA government, and not under Prime Minister Narendra Modi, they would have “deliver more, defend less. Focus more, deflect less. Think of the people, not the publicity. And finally work more, boast less” because that is what Congress had done during its rule.

Well, the truth is, even this idea alone is too absurd to be entertained.

Former army chief and minister of state for road, transport and highways, General VK Singh lost little time in taking Tharoor back to the “memory lane” to the times when the UPA was in power.

For INC, the short memory of the general public is the only saving grace. Thank God, they are not at the helm of affairs. I shudder at the devastation and the scams which would have been caused even during a pandemic.

“Pandemic apart, we are also witnessing a wave of paid Congi trolls, who would have us believe that the government is a failure, and had there been a Congi PM, things would have been much better,” General tweeted from his official handle.

Gen. VK Singh thereafter went about dissecting the track record of Congress during their heydays to lay the claim of Tharoors and trolls to rest.

Tharoor claimed to “Deliver more, Defend Less”. However, Singh pointed out how when the Uttarakhand cloudburst tragedy had happened in 2013, not only the state government but even the Manmohan Singh-led Centre government took a full three days to come to senses and act upon it. Rahul Gandhi, he alleges, remained absent for most of the time.

The most important rule of intelligent politics is to be upfront and heard and sighted at the time of the disaster, without losing any time. But then PM  Manmohan Singh didn’t address the nation even after a week, said Singh.

Coming to next, “Think of the people, not the publicity” comment, Singh said: It would be embarrassing for Tharoor to remember that the relief packages were sent to the state after the Congress top leadership, Rahul and Sonia Gandhi, officially ‘flagged off’ 25 trucks full of relief material to the state.

What this gesture did was to validate the fact that Congress’ reaction to the incident was neither well-timed nor whole-hearted. Else, the trucks could have been sent off without ceremony right?

Adding to this, the trucks even after three days, didn’t reach the destination. When party spokesperson Sandeep Dikshit was asked about the whereabouts of the trucks, he said he had no idea. “I  don’t have any information but I know there are youth Congress members in Rudraprayag,” he had said.

The fully-loaded trucks remained parked at Rishikesh in Uttarakhand for three days.

Singh further highlighted that “15 days after the flash floods and nothing from the center, the rotting dead bodies posed a risk of an epidemic. The Uttarakhand government refused assistance from all states to hide its inaction.”

Then home minister Sushil Kumar Shinde banned VIP choppers in Uttarakhand as “they were interfering with rescue operations”. But soon after he announced that Rahul left with his convoy to the state.

His presence, like Shinde apprehended, would have created necessary ruckus and divided the attention of rescue workers and government officers who were concentrating on the victims at that time but little did he care!

Finally, responding to the “work more, boast less” claim, Singh attacked and wrote, “The only relief work which happened on the ground was done by the army and paramilitary. That too without any specific directions from the central government.”

But the officer who was a part of the supervisory team gave a factual position of what Modi did.

“What all of you are not understanding is that after the Kutch earthquake, the Gujarat government has acquired the capability and more importantly, sensitivity to deal with any kind of disasters. Why should we not share our knowledge with the devastated state? That is real federalism according to Modi. Modi’s critics don’t appreciate that everyone woke up only two days after, but we got the advantage because we anticipated the calamity as soon as the news of the cloudburst was reported,” he said.