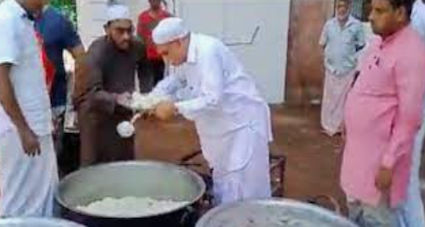 There are communities in India who will simply not eat anything cooked outside of their own homes or religious locations. You can see them, often, on trains – travelling with tins of home cooked food, packed in reverse order of consumption. I have had the pleasure of sharing their hygienically prepared and tasty home food, often fried but always very tasty and almost every time totally vegetarian. Maybe a boiled egg or three, bought off the platform, but always with the shell still on.

Then there were the Army formations on the move of my youth. Carrying dry rations, picking up fresh produce en route, and often cooking on tandoors and field kitchen kits loaded in open wagons. Food was then served, fresh, in the passenger coaches or often, on other open wagons decked out as messrooms with sofas, tables and sometimes even a bar. The big thing was and still is that the kitchens are open kitchens, everybody can take a look at what is being cooked and how, as long as they don’t mess with the cooks.

On ships, the term shipshape emerged from the way galleys were kept spanking clean. This natural camber and trim on ships helps for water used to clean things drain out efficiently – so galleys were routinely washed and cleaned every evening and then again in the morning. The galleys were made in such a way that you could watch and smell, but not dare to touch, and if you offered suggestions, you were invited to first go take a bath, put on fresh clothes, put on the requisite apron and cap, and then come and lend a hand.

So what is it with the “thookiya” controversy impacting a particular community sweeping the country lately? Why does it appear to be almost like a given that one particular kind of cuisine is now suspect?

Many reasons – to start with, a lot of the “thookiya” cooking is done away from the gaze of the customer. “Secret” recipes which are usually not much more than copious amounts of the cheapest salt, chilly powder and garam masalas, are added to random mystery meats, bubbling away in different forms of animal fats. The addition of all these elements is also to cover up the stink from meat that is already “high” because it was taken from an already dead animal, or because it was meat from unknown sources, lesser discussed the better. Water Buffalo meat, for example, has a distinctly different smell from any other meat that I have eaten – and I have been through many.

Secondly – the video evidence, whether legit or not, is over-powering. There is no smoke without fire, and globally there has been a lingering suspicion about such activities being a form of revenge or domination. Or even sanctified and sanctioned by culture.  Every which way, safety lies in avoiding any form of food that has or may have been contaminated, especially if it has not been cooked under the gaze of the customer.

Thirdly – and most importantly – the aggression with which the perps in the “thookiya” controversy push their own cultural food ethos forward whilst not giving equal respect to others, makes this one-sided approach loaded with inequity of the sort that slaves received from despots. This is borne out by history.

So what is the solution for those who do not want to get stuck in “thookiya” food, but still want to eat something cooked outside home?

Be very wary of people who spit in your food. That is all one can say or write at this juncture.