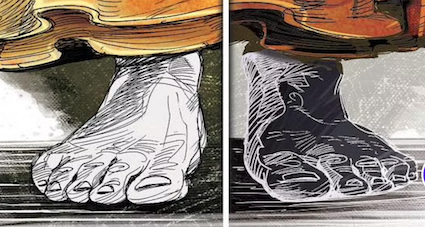 As explained to me recently by a mid-size businessman, for each entrepreneur benefitting quietly from economic growth and reduction in non-productive activities, there are 10-20 loud middlemen who are out of business. Then after another sip, he added, “and GodMen or GodWomen or even GodPersons”.

He then proceeded to give me a fairly exhaustive list of all the GodPersons his family had had to deal with in the past 2 generations to keep the flow of documentation out of Delhi well oiled so that the basics of a mid-sized business could be kept afloat, mixing metaphors with a golden glow, as he got into explaining things to me. Some of which I was already aware of, but the rest was a learning curve, stronger in the cold and clear air that Delhi’s curfew has brought about.

Incidentally, since theirs is an all-India business, the GodPersons come from across all Faiths and Persuasions. Mostly described in percentage or per piece or per person terms. Everything was “setting” and part of the numbers as well as out of the bottom-line.

Those numbers are now down to zero. GodPersons are not in the equation for commerce in India anymore. Unless out of choice.

So, where have all the GodPersons of Politican Lootyens Delhi gone, how come we don’t see them anymore?

Some of them are in jail. Others are in other parts of India, away from the lobbying counters and the opaque banking regimes, as they go ahead with whatever their line of work with whichever chosen Power above is. Some have retreated full time into the real estate business where they often grab from their own flock.

This much I do observe – many of them smile and laugh a lot more than the previous lot, so there must be something good going on. Happy Gods and Godpersons, what more can us humans want, in a world full of worries?

But getting to things seriously, people may recall when getting a bijli meter replaced, or organising a visa for labour movements to the remittance countries, required the blessings for a cost from an assortment of grim looking persons. Just two examples, I am sure people of my vintage can think of many more Godperson roles in Delhi, permissions for factory expansion or expediting imports of vital spare parts for machines?

Across the world, and especially now in India, things with GodPersons are changing it seems. With no ground power. Now religion is seen as aligned with a state. The Ram Temple made it real in India.

Economic power of the people resulted in the end of shamaans-military power kept it equal across all. The people finally had a choice. I call it the “tum taar kaat doge, (bijli/phone) hum mobile/solar laga denge” concept. (You cut the wires, we go wireless.) Including the previously via GodPerson wire connection to God. Now wireless!

We need no wire, no land, we are akashic. Hindutva in India is soil, land, real. All the other elements too.

For Indians what do you say? In our times we knew this as a “holdall”. We now have our direct hotlines to all our Gods. Wireless.

And that is true strength as a Nation.