Golwalkar and those two paragraphs 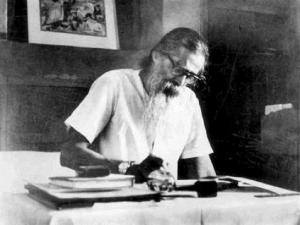 Madhav Sadashiv Golwalkar needs you on his 45th death anniversary on Tuesday (June 5, 1973). Chances are he would be reviled by Leftists Sitaram Yechury, and “Liberals” Ramachandra Guha, for his alleged affinity with Adolf Hitler. It would help them paint Rashstriya Swayamsevak Sangh (RSS) as a Fascist and Nazist force, a virulent campaign meant to neutralize the sting out of Pranab Mukherjee’s upcoming visit to RSS headquarters on June 7.

“Guruji” as Golwalkar is known, was in public eye for a long period between 1940-1973 as the second sarsangchalak of RSS. In his profuse writings, letters, articles, statements and interviews, there is NOT ONE single sentence which declares Guruji’s admiration for Hitler. Not one. Yet libraries of articles and books repeat the lie to run down the world’s biggest mass organization.

This ocean of lies floats on a mere two paragraphs which appeared in Guruji’s maiden book in 1938, “We, Our Nationhood Defined”. The book has never been reprinted since 1947. It’s been over 70 years but these two paragraphs alone is the edifice around which an entire cottage industry of RSS-bashing, Hindu-mocking has flourished. Only Shiva knows how many careers have been launched; reputations air-brushed; funds transferred to crooks reaping the harvest out of these two paragraphs.

As an analogy, why Karl Marx is not Hitler-like for he too described Jews as “arch-exploiters”? Or John F. Kennedy so, for he praised Fascism-for-Italy and Nazism-for-Germany in the 1930s? Or our own Pt. Nehru for he swore by socialism even as millions were being massacred in its name in Stalin’s Russia?

But let’s look at these two contentious paragraphs first:

“From the standpoint, sanctioned by the experience of shrewd old nations, the foreign races in Hindustan must either adopt the Hindu culture or language, must learn to respect and hold in reverence Hindu religion, must entertain no idea but those of the glorification of the Hindu race and culture, i.e. of the Hindu nation, and must lose their separate existence or merge into the Hindu race, or may stay in the country, wholly subordinated to the Hindu nation, claiming nothing, deserving no privileges, far less any preferential treatment–not even citizens’ rights.”

Let’s look at key issues in the paragraph. One, there is no call for genocide for it says “minorities can stay in the country.” The sentence “not claim any privilege” isn’t objectionable either for that’s the decree of “secularists” alone. All the democracies of the world are run by this maxim.

As for Citizens’ Rights, before we describe its context, let’s remember most Muslim countries till today exclude non-Muslims in its political decision-making system. Golwalkar’s prescription for Non-Hindus is vastly different from Sharia’s prescription for non-Muslims. Golwalkar isn’t stopping non-Hindus from bearing arms or riding a horse. So if Golwalkar/RSS are fascist, how would you describe Quran and Sharia?

Now look at the context of this sentence. In 1938, the talk of a Muslim nation was gathering wind. Muslims advocated the two-nation theory in India. Such a theory had been applied on Austria-Hungarians, Ottoman and Czarist empires. Lenin has supported it; so had USSR constitution. Muslims claimed they were distinct from Hindus by dress and customs; food and marriage; religion and holy days etc. They also lived in separate neighbourhoods. So Golwalkar was only accepting the Muslim logic.

Those advocating a Muslim nation in 1938 unambiguously expressed and defined Muslim community as a separate nation (ummah). So if you are a separate nation, how could you be a full citizen in a Hindu state? As Dr Koenraad Elst says: “Remember, the same choice was given to Kennedy (John), the first Roman catholic president of the (protestant) US. He was asked if he was loyal to Roman Catholic Church or country? He said country.”

Now let’s turn to the second paragraph in contention:

“To keep up the purity of the race and its culture, Germany shocked the world by her purging the country of the Semitic races — the Jews. Race pride at its highest has been manifested here. Germany has also shown how well nigh impossible it is for Races and cultures having differences going to the root, to be assimilated into one united whole, a good lesson for us in Hindustan to learn and profit by.”

This paragraph again must be viewed in the context of 1938. This was the year when Hitler was hugely popular in India and no less around the world. He had transformed Germany; challenged the order of colonial powers. Why, even after WW II, Charles de Gaulle was spewing anti-Jews views. Eugenic politics was on in US and Scandinavia till the 1970s. The “Hitler Salute” was fairly common well into the 1950s. Democratic countries were racists and publicly proud of it. Subhas Bose was hailed in India even though he had joined hands with Japan, an ally of Fascist-Nazist forces.

Just to highlight the double standards, look at how Mahatma Gandhi shed tears on destruction of British Parliament and Westminister Abbey in WW II. But he had no such feel for monuments destroyed in Germany. Was England’s record in India any better than Germany in other countries in 1940?

All Golwalkar said was that Germany proved two nations in one state was not feasible. He drew an analogy but never supported Nazism. He could’ve done so in 1938 since England was still not at war with Germany.

If Golwalkar was a Nazi, he wouldn’t have extensively quoted Western scholars in his work. For instance he approved of John Stuart Mills’ words: “Free institutions are impossible in a country made up of different nationalities.” Golwalkar publicly believed in the authority of League of Nations (while fascist Italy left League of Nations in 1937).

Golwalkar never said Muslims must not hold public office; or intermarriage must be clamped down upon; or that “pogroms of Muslims” was the answer. He didn’t ask for Muslim professors to be removed from universities after the Partition. Golwalkar looked for assimilation of minorities; not dissimilation like Hitler did. What you would never be told is that US, England and France etc—all democratic countries—had refused rights to minorities in League of Nations. They all stood for assimilation of minorities. And so did Golwalkar.

Golwalkar had seen how Muslims in India had appealed to foreign Muslim powers, like Amir of Afghanistan, during the Khilafat Movement. His appeal for their assimilation in the 1930s thus appears perfectly legitimate. Those criticizing Golwalkar, must tell us what was RSS’ position during WW II? They must also be asked: Why don’t you quote from Deendayal Upadhyaya’s Integral Humanism, formulated in 1965 and the official ideology of RSS? Every BJP member has to swear by it.

In the same book, Golwalkar says: “The superiority complex of the White Man blurs their vision. (We.., Pg 6, 11).” Does it look like a comment of “White-Only” Nazis?

An American student who travelled Europe in the 1930s, wrote to his parents saying fascism is right for Italy; Nazism for Germany.” This student was no other than John F. Kennedy. Nobody calls Kennedy as Fascist or Nazist. Those who have no moral compunction while doing the same to Golwalkar and RSS, are at best agents of Left-Liberal mafia. They feed on chaos and anarchy; bloodshed and genocide in a society. Spot them in the light of Pranab Mukherjee’s visit to RSS Headquarters on Thursday.